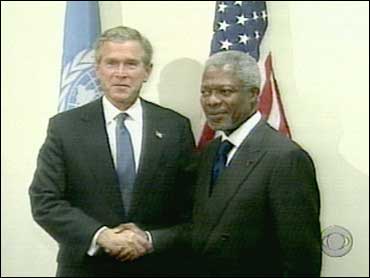 
To hear senior administration officials tell it, President George W. Bush's two-day trip to the United Nations appears to have gone quite well, helping to ease strains between Washington and a number of its allies.

Mr. Bush and his senior national security team have been signaling for several weeks that Washington was actively looking for help in the reconstruction of Iraq, both in the form of financial contributions and military troops to aid in security. The Bush administration's preliminary diplomatic work seems to be bearing fruit, even if some allies are taking public swipes at the Washington's decision to go to war in Iraq without an explicit green light from the U N.

American officials say relations have gotten a lot better between themselves and their French and German colleagues. French President Jacques Chirac, while publicly disagreeing with what it sees as America's "unilateral" military moves in Iraq, nevertheless also said at a U N news conference "we very much want the Americans to succeed," even as he acknowledged "we may have different ways of managing things."

One administration official said all it wants from the French is not to veto the resolution now circulating in the Security Council. And the French have indicated that while they may not support the resolution, they will not exercise their veto. So, "we're not counting on the French for any real help," said the official, meaning there's no expectation of French troops showing up in Baghdad to relieve Americans there now.

Mr. Bush, speaking after his meeting with Germany's Chancellor Gerhard Schroeder, said " the first thing I told him, I said,'Look, we've had differences and they're over, and we're going to work together.'" This is a clear step forward from the days when the two leaders barely spoke to each other.

For his part, Schroeder said Germany "…could very much envisage that we will assist in providing training for (Iraqi) security staff, be it police functions or be it some form of military function." Better yet, the Germans, U.S. officials happily point out, are not tying their offer of help to passage of another U N resolution.

Bottom line, the political and diplomatic war between the Bush administration and those European leaders who strongly opposed going to war against Iraq is now over and the meetings between Mr. Bush and French and German leaders served their purpose to restore cooperation between these long time allies. No, they are not going to agree on everything and some friction will remain. The good news out of New York is that the acrimony is gone.

Whether all this positive momentum on the international diplomatic front will help counter the American public's perception -- real or imagined — that things are going poorly in Iraq is not something that any administration official can yet determine.