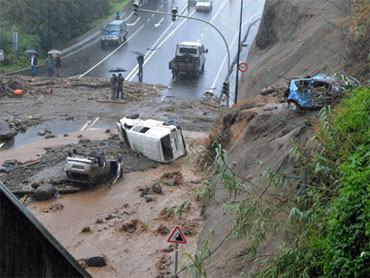 Rescue workers in Madeira have dug through heaps of mud, boulders and debris, searching for victims buried by floods and mudslides that have killed at least 42 people on the popular Portuguese island.

Residents looking for missing loved ones were directed by local authorities Sunday to the resort's international airport, where a makeshift morgue has been set up.

Social services spokesman Francisco Jardim Ramos said not all the bodies had been identified. The centre is equipped with psychiatric, psychological and social counselling services, he said.

More than 120 other people were injured and an unknown number were missing, possibly swept away or smothered, authorities said, adding the death could still rise. Of 248 people who were forced to flee their homes for temporary shelters, 85 have been allowed to return home, Ramos said.

Late Sunday, a spokeswoman for the British Foreign office confirmed that a British national had died, but declined to give further details. The spokeswoman spoke on condition of anonymity in line with department policy.

The Foreign Office also said a small number of Britons had been hospitalized on Madeira. The island is popular with British tourists, who for centuries have regarded wines made in Madeira as a luxury product.

The worst storm to hit Madeira since 1993 lashed the south of the Atlantic Ocean island, including the capital, Funchal, Saturday, turning some streets into torrents of mud, water and rolling debris.

"We heard a very loud noise, like rolling thunder, the ground shook and then we realized it was water coming down," said Simon Burgbage, of Britain.

Madeira is the main island, with a population of around 250,000, of a Portuguese archipelago of the same name in the Atlantic Ocean just over 480km (300 miles) off the west coast of Africa.

The flash floods were so powerful they carved paths down mountains and ripped through the city, churning under some bridges and tearing others down. Residents caught in the torrent clung to railings to avoid being swept away. Cars were tossed about by the force of the water; the battered shells of overturned vehicles littered the streets.

"It was horrible, there were cars on rooftops, there were vans and trucks that had fallen and been totally crushed," said German tourist Andreas Hoisser.

The raging water swept a fire truck downstream, slamming it into a tree.

Funchal residents and visitors must now contend with a lack of fresh water until destroyed infrastructure is repaired, the head of water services said.

"One of the main conduits of the city, which is upstream of most of the public distribution systems, has simply disappeared," said Pimenta de Franca.

The death toll "will likely increase, given the circumstances of this flood," Ramos said, adding there were "great difficulties" with communications on the island since phone lines were ripped out by the deluge.

"People are scared, some have lost loved ones and things are very complicated because of that," said Madeira-born Luisa Jardin.

Firefighters used pumping equipment to try to drain an underground parking garage at a downtown department store close to where the heaviest floodwaters descended. Local authorities feared shoppers may have been trapped below ground by the deluge.

A medical team backed up by divers and rescue experts arrived Sunday aboard a C-130 transport plane at the archipelago, 550 miles (900 kilometres) southwest of Lisbon. The plane was also carrying telecommunications equipment. Once telephone communications are restored it will be easier to discover who is missing, Ramos said.

The sun begun shining Sunday morning, making it easier for rescue workers to move around roads and bridges damaged by floodwaters and littered with uprooted trees, cars and boulders which hampered search and rescue efforts.

By midday Sunday, tourists could be seen strolling and taking photographs in Funchal. Streets just a few yards away from the channels where the muddy deluge raced toward the sea were largely unscathed.

But more rain hit later in the day, raising fears of new mudslides on the mountainous island.

The island's most famous son, Real Madrid football star Cristiano Ronaldo, was horrified by the floods.

"Nobody can remain indifferent to the disaster," he told journalists in Madrid. "I want to express my willingness to, as far as I can, help agencies and authorities to overcome the effects of this devastation."
By Associated Press Writers Armando Franca and Harold Heckle; AP Writers Raphael G. Satter and Don Melvin also contributed to this report