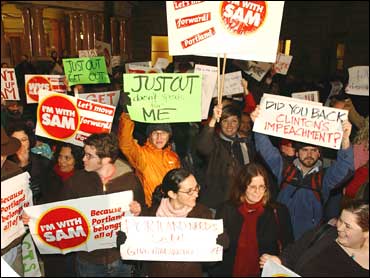 The mayor of Portland, Ore., said Sunday he would not resign despite calls for him to do so after he admitted he lied and asked a teenager to lie about their sexual relationship.

"Tomorrow, I go back (to) work as your mayor. I know I have let you down and made mistakes. I ask your forgiveness," Mayor Sam Adams said in a statement. "I believe I have a lot to offer the city I love during this time of important challenges."

Adams, who was just sworn in on Jan. 1, publicly apologized this past week for lying early in his campaign about the relationship with an 18-year-old man in 2005.

The scandal has resulted in an investigation by the Oregon attorney general and has divided the city and its gay and lesbian community. The police union and four Portland newspapers have called for his resignation, but Adams has found strong support to remain, including a Friday rally on his behalf at City Hall that drew more than 400 people.

In his statement, Adams said he would "work harder than I ever have in my life" to help see the city through the tough economic times.

Two of the leading business associations in Portland had taken a wait-and-see stance.

Steve Holwerda, Chairman of the Portland Business Alliance, said in a statement the board had differing views on whether Adams should resign but they agreed it was a critical time for the city and some of its major development projects.

"Whether or not he stays in office should be based on whether he can lead our city effectively and with the integrity that all our citizens deserve," Holwerda said.

But the board of the Portland Area Business Association went further and said Adams should remain in office, but added, "pending the outcome of official investigation."

The teenager, Beau Breedlove, was a legislative intern when he met the mayor at age 17. He and the mayor both say their sexual relationship started after his 18th birthday, in June 2005.

Breedlove, now 21, told The Oregonian on Saturday that the relationship was consensual.

"I do not see any relationship that I ever had with Sam as me being taken advantage of," Breedlove told the newspaper. "I do not feel like I was ever a victim."

When Adams confirmed the relationship this past week, he said it was inappropriate because of the age difference; Adams is now 45.

He also said he lied early in his mayoral campaign and asked Breedlove to lie as well because rumors at the time falsely suggested the relationship involved a minor.