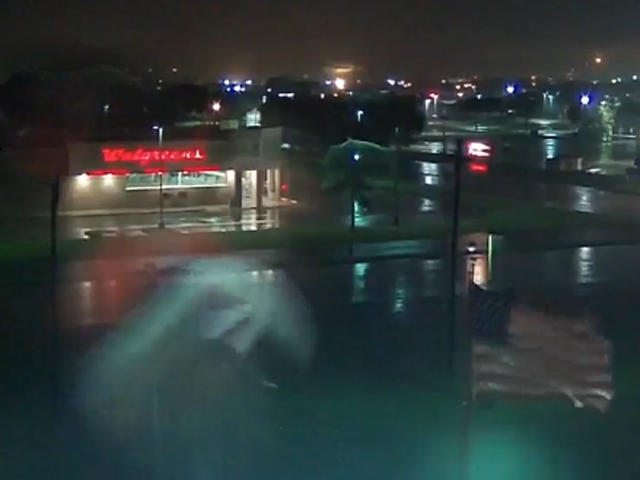 PORT ARTHUR -- The situation in this city 91 miles east of Houston was dire early Wednesday, with homes expected to fill with rising floodwaters and residents unsure of how to get out of the city, reports CBS Beaumont, Texas affiliate KFDM-TV.

Heavy rain from Tropical Storm Harvey was falling in the city. It was inundated with some 40 inches of rain Tuesday, the station says. The National Weather Service issued flash flood emergencies for parts of Southeast Texas, including Beaumont and Port Arthur.

Conditions were so bad that Motiva Enterprises began shutting its major refinery there due to flooding.

"We're getting 911 and rescue calls but there's nothing we can do," Stephens said. "We can't take the boats out right now. The water is rising and it's coming there and it's no way to get to them."

Many residents were posting pleas for help on social media, and many KFDM viewers were calling the station pleading to be rescued.

The county subsequently posted on its Facebook page that water rescue operations would resume at daylight.

Mayor Derrick Freeman told KFDM some 20,000 homes had water in them -- virtually all the homes in the city.

He said on his Facebook page that Port Arthur "is underwater right now but we are coming!" He also urged residents to get to higher ground, but avoid becoming trapped in attics. he said dumpt rucks were being used to help evacuate residents.

The city's civic center was being used as a shelter but then it, too, flooded and evacuees were being brought to the Carl A Parker Multipurpose Center, KFDM reports. One evacuee tweeted an image:

Dozens of evacuees were stranded in a bowling alley, the station said.

At one point, Mayor Freeman wrote on his Facebook page that, "Part of our rescue team is now fighting an apartment fire and rescuing folks from the complex. And the lightning has slowed up some rescues, but they have NOT stopped."

Deputy Marcus McLellan told the station the city's 911 system has been inundated with calls, which are bouncing to other law enforcement agencies. McLellan said the sheriff's office is working to relay those calls to the proper authorities in Port Arthur.

Michael Sinegal, who represents Port Arthur on the Jefferson County Commissioners Court, told KFDM he suggested to one woman that she take shelter in her freezer because of how close she lives to a drainage ditch. She had almost 4 feet of water in her home.

"We need boats. We need whatever it takes," Sinegal said.