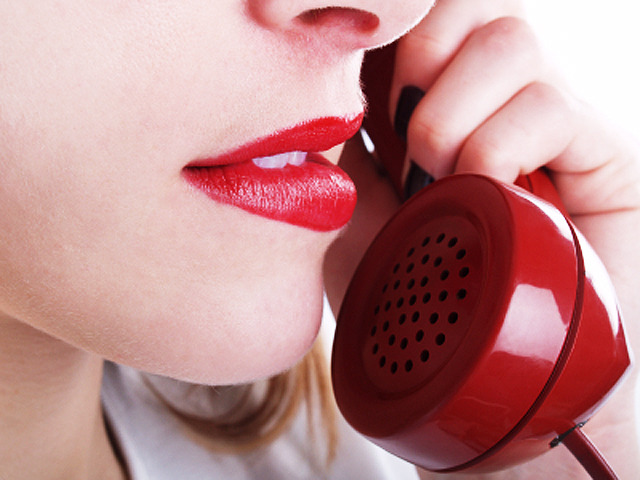 NEW YORK - For years, teenagers across the U.S. could call a toll-free hotline if they had embarrassing questions about AIDS and safe sex. Dial the same number now and you get a recording of giggling women offering to talk dirty to you.

"We both have big appetites for sex," they purr. "Pinch us and poke us. Spank us and tease us. We love it all. ... Enter your credit card number now."

Those naughty misdials, and countless others like them, appear to be no accident.

Records obtained by The Associated Press show that over the past 13 years, a little-known Philadelphia company called PrimeTel Communications has quietly gained control over nearly a quarter of all the 1-800 numbers in the U.S. and Canada, often by grabbing them the moment they are relinquished by previous users. As of March, it administered more 800 numbers than any other company, including Verizon and AT&T.

And many, if not most, of those 1.7 million numbers appear to be used for one thing: redirecting callers to a phone-sex service.

Many people who mistakenly dial a phone-sex line probably just get red-faced and hang up as quickly as possible. Others apparently respond to the come-on and supply their credit card number.

"I guess enough people go for it that it makes business sense," said Aelea Christofferson, president of ATL Communications, another company that specializes in toll-free services. Capturing callers who have reached the wrong number — whether because they punched an incorrect digit or dialed a number without realizing it had changed hands — is a "big new industry," she said.

Founded in 1995, PrimeTel is one of around 400 companies registered as toll-free service providers for the U.S. and Canada. That gives it the same power to reserve and assign unused toll-free numbers as big phone companies with millions of customers. But PrimeTel appears to be amassing numbers predominantly for one closely related partner, National A-1.

There is nothing illegal about using toll-free phone services to promote adult entertainment, and callers aren't charged unless they supply their credit card information.

Over the years, though, PrimeTel has been hit with lawsuits and complaints alleging that it is violating federal rules banning toll-free service providers from hoarding digits. Federal Communications Commission rules say that "routing multiple toll-free numbers to a single toll-free subscriber" is usually considered hoarding.

The FCC has never taken formal action against PrimeTel or National A-1, although federal authorities have expressed renewed interest lately in companies that handle toll-free numbers. In the fall, authorities sent subpoenas to several, including PrimeTel, asking for information on how they acquire numbers and why.

And in October, federal agents and Philadelphia police spent two days removing records from National A-1's office suite, although it is unclear if the action was related to the phone business.

The man listed on many government records as the top executive at both PrimeTel and National A-1, Richard Cohen, declined interview requests. A lawyer for both companies, Charles Helein, would not discuss their business dealings in detail but said PrimeTel isn't breaking any rules or engaging in prohibited practices such as selling numbers or obtaining ones it doesn't intend to use.

"They are extremely sensitive to the FCC. ... They wouldn't have them if they didn't need them," Helein said of PrimeTel's huge pool of numbers. He said the company's large share hasn't caused any shortages: "Everybody's got all the numbers they need."

Helein said the raid last fall was not aimed at PrimeTel. National A-1 and its owners have a variety of business enterprises headquartered at the same address, including a website sometimes used by prostitutes to advertise their services.

According to a database maintained by an industry organization, PrimeTel was listed as the administrator of record for at least 1,667,000 out of around 7.87 million active 800 numbers as of this March. Industry experts said PrimeTel also holds a dominant share of numbers with other toll-free codes, like 888 and 866, giving it several million numbers overall.

Sex isn't the only business. Some numbers reach advertisements for a mortgage brokerage based in New Jersey. Others promote a dieting website or a travel reservation service. Those instances appear to be outnumbered by ones in which callers reach a phone-sex solicitation.

Critics of the company say it isn't the sex that bothers them, but the acquisition of so many numbers.

Bill Quimby, whose company, TollFreeNumbers.com, specializes in helping businesses obtain easy-to-remember digits to connect with customers, said it can be a challenge to find a good match because PrimeTel has gobbled up such an outsized share of the supply.

"They started by getting numbers for phone sex, then getting good numbers in general, then they started taking all phone numbers," he said.

A spokesman for the FCC, David Fiske, would not comment on whether the agency had ever examined PrimeTel's activities but said the commission is actively enforcing rules on number hoarding.

PrimeTel appears to have benefited by grabbing numbers associated with famous names, like 1-800-Beatles, or numbers that have recently been canceled but are still advertised widely.

From the late 1980s until around 2005, teenagers who dialed the national hotline used by Teens Teaching AIDS Prevention would reach a call center in Kansas City, Mo., where other youths were waiting to answer questions about the disease. When that program ended, the number was soon routed to one of National A-1's sex lines. But the AIDS hotline number is still publicized by public health groups.

When New York City's Fire Department relinquished its toll-free fire safety hotline a few years ago because of an administrative slip-up, PrimeTel grabbed it the moment it became available. Soon enough, 1-800-FIRETIP was ringing into one of National A-1's phone-sex lines.

The same thing happened to the Cook County Jail in Chicago when it canceled its toll-free inmate information line, and to rape counseling hotlines in Maine and New Mexico.

The Republican National Committee once printed a fundraising mailer with a toll-free calling code and was publicly embarrassed when the calls began ringing in to one of National A-1's chat lines.

"It was pretty embarrassing," Noyes said. "I had people walking around wearing T-shirts with that number."

People in the telecommunications industry who are familiar with PrimeTel say that in addition to snapping up familiar 1-800 numbers, the company may be trying to capitalize on people's fat-finger dialing mistakes by acquiring numbers that are just a digit or two away from a major company's number.

Helein denied PrimeTel was trying to capitalize from misdials or engaged in a strategy to intercept calls made by customers of other businesses.

The key to PrimeTel's business is its access to the entity that controls the assignment of toll-free numbers, called the 800 Service Management System. Numbers are available on a first-come, first-served basis at a cost of about 9.6 cents per month. When a customer is done using a number, it is supposed to go back into the pool for use by someone else.

FCC rules expressly ban service providers from reserving a number unless they have a genuine customer lined up to use it. Speculating in numbers is banned. They are considered public resources that may not be bought or sold. The big phone companies that supply toll-free numbers make their money not by selling the number itself but by providing telephone service.

But there are also companies that are illegally buying and selling the numbers, and they are a hot commodity, sometimes even available on eBay.

Such numbers are so highly sought-after that several companies have built powerful computer systems that search the database every day, looking for digits of potential value. Numbers can be reserved as quickly as 95 milliseconds after they are released by former users.

Helein said PrimeTel has been the target of complaints from other industry players who are "jealous" of the company's computer systems.