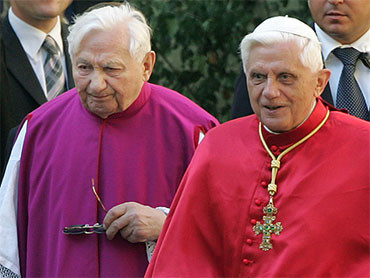 The pope's brother said in a newspaper interview published Tuesday that he slapped pupils as punishment after he took over a renowned German boys' choir in the 1960s. He also said he was aware of allegations of physical abuse at an elementary school linked to the choir but did nothing about it.

The Rev. Georg Ratzinger said he was completely unaware of allegations of sexual abuse at the Regensburger Domspatzen boys choir, part of a string of charges of sex abuse by church employees across Europe in recent days.

Responding to accusations that its policies encouraged silence about the problem, the Vatican said that the sexual abuse scandals in Germany and other countries were cause for anguish but its response has been prompt and transparent

In Austria, the head of a Benedictine monastery in Salzburg admitted to sexually abusing a child decades ago and resigned. Dutch Catholic bishops announced an independent inquiry into more than 200 allegations of sexual abuse of children by priests at church schools and apologized to victims.

The German abuse allegations are particularly sensitive because Germany is the homeland of Pope Benedict XVI and because the scandals involve the prestigious choir that was led by Georg Ratzinger from 1964 till 1994.

Last week, the Regensburg Diocese said a former singer at the choir had come forward with allegations of sexual abuse in the early 1960s. And across Germany, more than 170 students have claimed they were sexually abused at several Catholic high schools.

Ratzinger has repeatedly said the sexual abuse allegations date from before his tenure as choir director. Asked in the interview Tuesday whether he knew of them, Ratzinger insisted he was not aware of the problem.

"These things were never discussed," Ratzinger told Tuesday's Passauer Neue Presse German daily. "The problem of sexual abuse that has now come to light was never spoken of."

Jakob Schoetz, a spokesman for the Regensburg diocese, told The Associated Press that Ratzinger would not comment further on the issue.

There have also been reports of severe beatings by administrators at two primary feeder schools for the choir, one in Etterzhausen and one in Peilenhofen. One director, identified as Johann M., who headed the Etterzhausen school from 1953-1992, has been cited in several allegations as being particularly abusive.

Ratzinger said boys would open up to him about being mistreated in Etterzhausen.

"But I did not have the feeling at the time that I should do something about it. Had I known with what exaggerated fierceness he was acting, I would have said something," he was quoted as saying by the German paper.

"Of course, today one condemns such actions," Ratzinger said. "I do as well. At the same time, I ask the victims for pardon."

He said he had administered corporal punishment himself.

"At the beginning I also repeatedly administered a slap in the face, but always had a bad conscience about it," Ratzinger said, adding that he was happy when corporal punishment was made illegal in 1980.

Ratzinger said a slap in the face was the easiest reaction to a failure to perform or a poor performance. How hard it was varied greatly, depending on who administered it.

The pope and his older brother are close. Joseph Ratzinger had been planning to return to Germany and move his brother into a house with him upon retirement from the Vatican - a plan made moot by his election as pope. He refers to his brother as his trustworthy guide and companion and says his brother helps him to accept old age with courage.

The Vatican moved to defuse criticism after the German justice minister, Sabine Leutheusser-Schnarrenberger, said Monday that a Vatican secrecy rule has played a role in a "wall of silence" surrounding sexual abuse of children. She cited a 2001 Vatican document requiring even the most serious abuse cases to be first investigated internally.

Vatican spokesman the Rev. Federico Lombardi defended the main ecclesiastical institutions involved, saying they have taken up the matters "promptly and decisively."

"They have shown a desire for transparency, in a way they have accelerated bringing the problem to light by inviting the victims to speak up even when the cases dated to a while back," Lombardi told Vatican Radio.

He said "mistakes" within the church were deplorable and said the cases are pushing it church toward dealing with the problem.

"While we can't deny the gravity of the anguish the church is going through, we cannot give up doing everything possible so that in the end positive results can also be achieved," Lombardi said, citing as goals better children protection and the church's own "purification."

Lombardi declined to comment on the statement attributed to the pope's brother that he slapped people.

He noted that in Canon Law sexual abuse of minors is among the most serious offenses, and said the Vatican's document in 2001 was "a fundamental signal in calling the bishops' attention to the gravity of the problem."

A statement by the U.S. group Survivors Network of those Abused by Priests called the Vatican's claim that Catholic institutions had been timely in their reaction "depressing and disingenuous."

"Sadly, the truth is just the reverse," Peter Isely, Midwest director of the group. "Regarding pedophile priests and corrupt bishops, the church hierarchy responds only when forced to do so by external pressures."