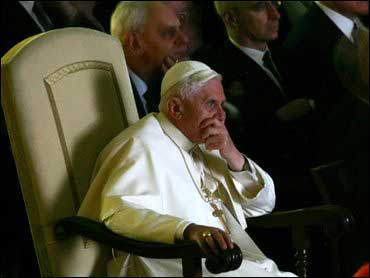 Pope Benedict XVI attended a Vatican screening Thursday of a television miniseries on the life of Pope John Paul II — giving equal billing to the latest biopic on his predecessor after watching a rival production six months ago.

Benedict said "Pope John Paul II," which CBS will broadcast Dec. 4 and Dec. 7, provided an important service in spreading the message about the life and works of the late pope.

"I believe this film constitutes the latest example of the love that the people had for Pope Wojtyla and their desire to remember him, to see him again and to feel him close," he said, referring to his predecessor by his Polish surname, in remarks to the audience at the end of the film.

Voight said the movie gave him the opportunity to bring to the screen John Paul's complex nature. John Paul was "gifted in many, many arenas," Voight told The Associated Press after the screening.

"It was wonderful to understand enough about those areas to be able to put a focus on them — protecting his sense of humor, protecting his emotional presence, his toughness," Voight said.

Benedict watched an Italian-language version of the film.

The movie opens with John Paul being shot and seriously wounded on May 13, 1981, while riding through the crowds during a general audience and closes with a scene of crowds at his funeral on April 8 in the same square.

CBS said Vatican historians had provided "script consultation," and its crews had obtained exclusive footage of St. Peter's Square, the Sistine Chapel and surrounding areas of the Vatican.

In May, Benedict watched a Vatican screening of the miniseries "Karol, A Man Who Became Pope," which was shown in the United States on the Hallmark Channel. He praised that film, which included scenes of Nazi persecution of Poles and Jews, and denounced the barbarity of World War II, which both he and John Paul lived through.

That film began in September 1939, when World War II broke out with the Nazi invasion of Poland and the future pope was a university student in Krakow, Poland. It ended with his election as pontiff.

The CBS production portrays both the young Karol Wojtyla and the pope, taking the viewer through his 26-year pontificate, including his world travels.

CBS trimmed the first installment of the miniseries for the Vatican screening, bringing the four-hour film down to 90 minutes.

Several movies about John Paul have come into production following his April 2 death. A few weeks ago, dozens of Italian extras were on the edge of St. Peter's Square, re-enacting the scene of the 1981 attempt on the pope's life for the latest production.