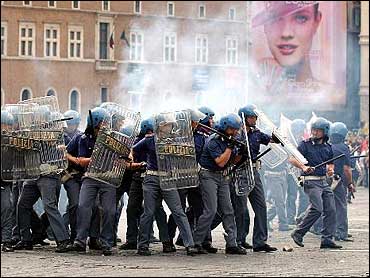 U.S. President George W. Bush got a sharp dose of Europe's opposition to his Iraq policy Friday, quietly in the halls of the Vatican from Pope John Paul II and loudly in the streets of Rome from thousands of demonstrators.

The ailing pontiff complained about recent "deplorable events," an apparent reference to the abuse of Iraqi prisoners by U.S. troops. In the absence of a commitment to shared human values, "neither war nor terrorism will ever be overcome," he said, struggling to speak.

However, the pope welcomed the recent establishment of an interim government and called for a speedy transfer of sovereignty to the Iraqis.

Not far from the Vatican walls, tens of thousands of protesters took to the streets to demonstrate through central Rome, many with signs demanding Italy withdraw its troops from Iraq. A score of demonstrators hurling stones clashed with police during the march. Others threw firecrackers and set a trash can on fire.

Bush had dinner with a top ally on Iraq, Italian Prime Minister Silvio Berlusconi. On Saturday, the president heads to Paris to meet with one of his sharpest war critics, French President Jacques Chirac.

Despite Berlusconi's backing, and his decision to send 3,000 Italian troops to Iraq, polls show that a majority of Italians oppose the U.S.-led war and occupation of Iraq, a sentiment common throughout western Europe.

Bush is on a three-day trip to Italy and France to help commemorate the June 1944 liberation of Rome and the allied D-Day invasion of Normandy. He was also using the trip — and an international economic summit next week in the U.S. state of Georgia — to try to build more support among leading nations for a new U.N. resolution to deal with post-occupation Iraq.

But the announcement in Baghdad that five U.S. soldiers were killed and five wounded on Friday when their vehicles were attacked in east Baghdad served as a reminder that Iraq remained an extremely dangerous place.

Seated next to the pope, Bush promised the United States would work for "human liberty and human dignity," without making any reference to Iraq. He presented the pontiff with the presidential medal of freedom, America's highest civilian award, calling him "a devoted servant of God."

The president and his wife Laura laid a green wreath at the Ardeatine Cave Memorial, where Nazi occupiers massacred 335 Italian citizens in 1944. Bush, alone, approached the wreath, straightened its blue ribbon and bowed his head as a bugler played.

At the Vatican, Bush sat impassively as the 84-year-old pope, seated in front of a microphone, read his statement in English in a voice that was audible, but not easily understood. His hands trembled from Parkinson's disease.

"Mr. President, your visit to Rome takes place at a moment of great concern for the continuing situation of grave unrest in the Middle East, both in Iraq and in the Holy Land," the pope said.

"In the past few weeks, other deplorable events have come to light which have troubled the civic and religious conscience of all."

Although the remarks appeared directed at abuses of Iraqi prisoners by U.S. troops at Baghdad's Abu Ghraib prison, they could also be taken to include other atrocities such as the kidnapping of foreign civilians in Iraq by Islamic militants and acts such as the beheading of an American contractor.

The pope did not elaborate. Neither would papal spokesman Joaquin Navarro-Valls, although he did not dispute characterizations that the comments referred primarily to abuse at Abu Ghraib prison.

The spokesman said that while the pope had reiterated the Vatican's long-standing opposition to the war, he made plain he was ready to move forward.