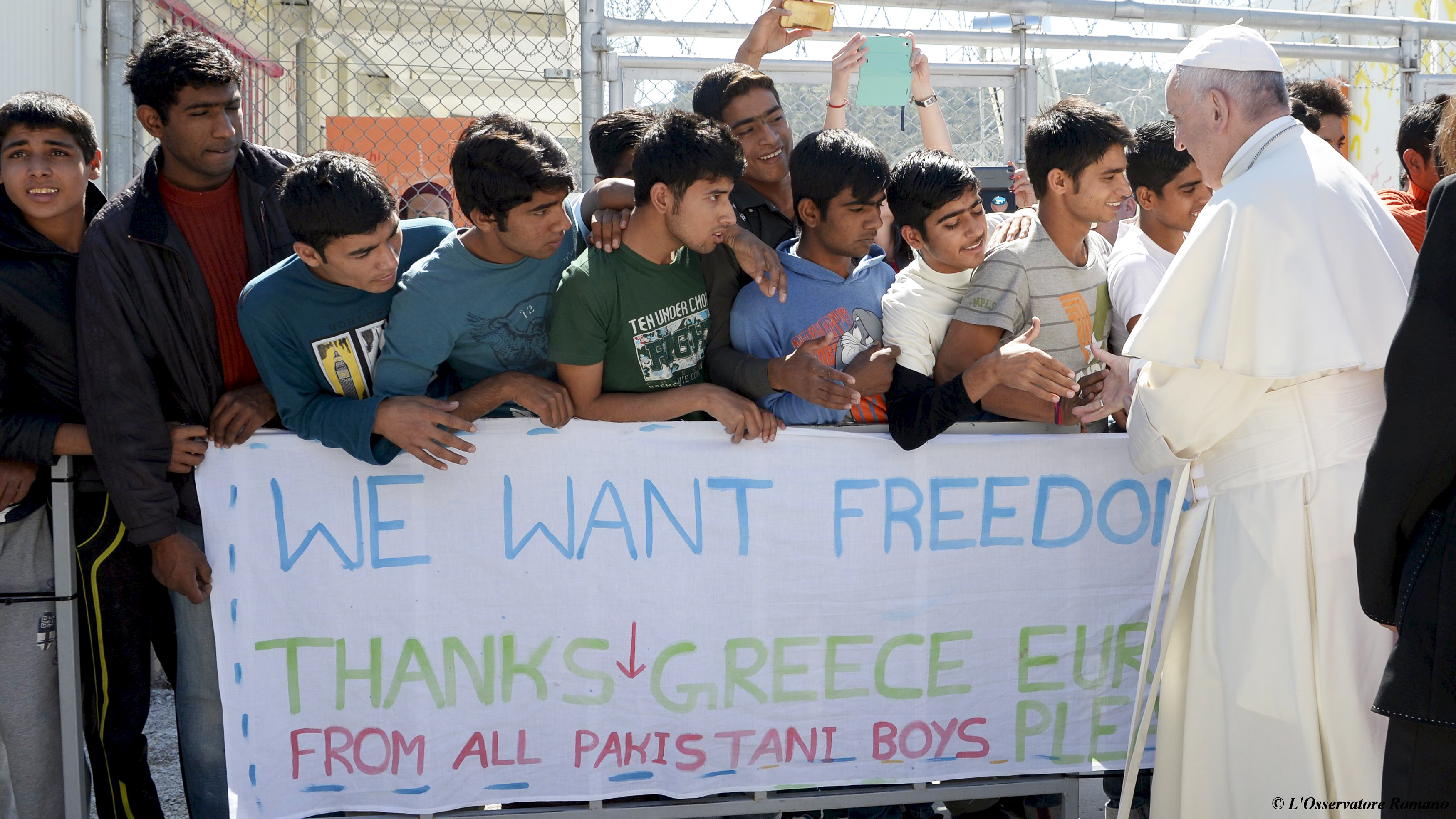 MORIA, Greece -- Pope Francis implored Europe on Saturday to respond to the migrant crisis on its shores "in a way that is worthy of our common humanity," during an emotional and provocative trip to Greece.

The pope visited the island of Lesbos alongside the spiritual leader of the world's Orthodox Christians and the head of the Church of Greece to thank Greece for its welcome and highlight the plight of refugees as the European Union implements a controversial plan to deport them back to Turkey.

The Vatican issued a statement saying: "The Pope has desired to make a gesture of welcome regarding refugees, accompanying on his plane to Rome three families of refugees from Syria, 12 people in all, including six children. These are all people who were already in camps in Lesbos before the agreement between the European Union and Turkey."

The Vatican said all the members of the three families are Muslims. Two families come from Damascus, and one from Deir Azzor (in the area occupied by Daesh). Their homes had been bombed.

The Vatican will take responsibility for bringing in and maintaining the three families. The initial hospitality will be taken care of by the Community of Sant'Egidio.

The Vatican is already hosting two refugee families, so the gesture would be in keeping with Francis' call for Europe to open its hearts and borders to those most in need.

Many refugees fell to their knees and wept at Francis' feet as he and the two Orthodox leaders approached them at the Moria detention center. Others chanted "Freedom! Freedom!" as they passed by. Francis bent down as one young girl knelt at his feet sobbing uncontrollably. A woman told the pope that her husband was in Germany, but that she was stuck with her two sons in Lesbos.

In his remarks to them, Francis said the refugees should know that they are not alone and shouldn't lose hope. He said he wanted to visit them to hear their stories and to bring the world's attention to their plight.

"We hope that the world will heed these scenes of tragic and indeed desperate need, and respond in a way worthy of our common humanity," he said. "May all our brothers and sisters on this continent, like the Good Samaritan, come to your aid in the spirit of fraternity, solidarity and respect for human dignity that has distinguished its long history."

Francis, Ecumenical Patriarch Bartholomew I and the archbishop of Athens, Ieronymos II, then signed a joint declaration calling on the international community to make the protection of human lives a priority and to extend temporary asylum to those in need.

The declaration also called on political leaders to use all means to ensure that everyone, particularly Christians, can remain in their homelands and enjoy the "fundamental right to live in peace and security."

"The world will be judged by the way it has treated you," Bartholomew told the refugees. "And we will all be accountable for the way we respond to the crisis and conflict in the regions that you come from."

Francis and the two Orthodox leaders, officially divided from Catholics over a 1,000-year schism, then lunched with eight of the refugees to hear their stories of fleeing war, conflict and poverty and their hopes for a better life in Europe. And then they went to the island's main port to pray together and toss a floral wreath into the sea in memory of those who didn't make the journey.

Earlier Saturday, Francis met Greek Prime Minister Alexis Tsipras and thanked him for the "generosity" shown by the Greek people in welcoming foreigners despite their own economic troubles, the Vatican said.

Tsipras, for his part, said he was proud of Greece's response "at a time when some of our partners - even in the name of Christian Europe - were erecting walls and fences to prevent defenseless people from seeking a better life."

Hours before Francis arrived, the European border patrol agency Frontex intercepted a dinghy carrying 41 Syrians and Iraqis off the coast of Lesbos. The refugees were detained and brought to shore in the main port of Mytilene.

The son of Italian immigrants to Argentina, Francis has made the plight of refugees, the poor and downtrodden the focus of his ministry as pope, denouncing the "globalization of indifference" that the world shows the less fortunate.

The wreath-tossing ceremony is a gesture Francis first made when he visited the Italian island of Lampedusa in the summer of 2013, his first trip outside Rome as pope, after a dozen migrants died trying to reach the southern tip of Europe. He made a similar gesture more recently at the U.S.-Mexican border, laying a bouquet of flowers next to a large crucifix at the Ciudad Juarez border crossing in memory of migrants who died trying to reach the U.S.

"He is slightly provocative," said George Demacopoulos, chair of Orthodox Christian studies at the Jesuit-run Fordham University in New York. Citing Francis' Mexico border visit in February, in the heat of a U.S. presidential campaign where illegal immigration took center stage, he added: "He is within his purview to do so, but that was a provocative move."

The Vatican insisted Saturday's visit is purely humanitarian and religious in nature, not political or a "direct" criticism of the EU plan.

However, the Vatican official in charge of migrants, Cardinal Antonio Maria Veglio, has said the EU-Turkey plan essentially treats migrants as merchandise that can be traded back and forth and doesn't recognize their inherent dignity as human beings.

The March 18 deal stipulates that anyone arriving clandestinely on Greek islands on or after March 20 will be returned to Turkey unless they successfully apply for asylum in Greece. For every Syrian sent back, the EU will take another Syrian directly from Turkey for resettlement in Europe. In return, Turkey was granted concessions including billions of euros to deal with the more than 2.7 million Syrian refugees living there, and a speeding up of its stalled accession talks with the EU.

Human rights groups have denounced the deal as an abdication of Europe's obligations to grant protection to asylum-seekers.

Pope held a half an hour presser on the return flight from Lesbos. Here are four excerpts, on refugees, Sanders and the Apostolic Exhortation:

ON BRINGING REFUGEES BACK

It was an inspiration, a week ago, which probably came from one of my collaborators, and I accepted immediately, immediately, immediately because I saw that it was it the (Holy) Spirit that was speaking. Everything was done within the rules, they are coming with documents. The three government, Vatican City State, the Italian government, the Greek government, they inspected everything, they saw everything and all gave their visas. They (the refugees) are being taken in by the Vatican. It will be the Vatican, with the collaboration of the Sant'Egidio Community, to look for work for them, upkeep... They are guests of the Vatican and they will join the two Syrian families who are already being hosted in the two Vatican parishes.

This morning when I was leaving (Casa Santa Marta) Senator Sanders was there, he came to the meeting on Centesimus Annus, and he knew that I was leaving at that time, and he had the courtesy to greet me. I greeted him and his wife and another couple that was with him, because they were staying at Santa Marta, because all the participating members except for the two presidents - who I believe were staying at their embassies - all of them were staying at Santa Marta. So when I went down, I said hello, a shake of the hand and nothing more. This is politeness (good manners). This is called good manners, not meddling in politics. And if anyone thinks that to greet someone means to meddle in politics, then I suggest that they find a psychiatrist.

ON BRINGING BACK MUSLIM REFUGEES

I didn't choose between Christians and Muslims. Those three (families) had their papers in order, their documents were in order, it could be done. There were two Christian families on the first list, and they didn't have documents. All refugees are children of God.

Q: Are there new, concrete possibilities for divorced and remarried to have communion that did not exist before the Apostolic Exhortation?

I can say, yes. But that answer would be too small. I recommend to all of you to read the presentation by Cardinal Schoenberg who is a great theologian...he knows the doctrine of the church. In that presentation your question will be answered.