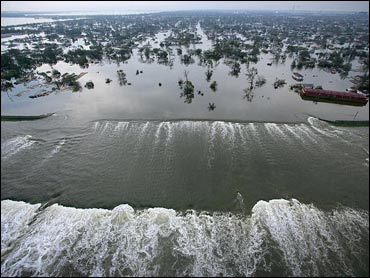 Pope Benedict XVI on Monday formally rescinded the promotion of an ultraconservative priest who came under fire for suggesting that God punished New Orleans with Hurricane Katrina.

The Vatican announcement confirmed a previous decision by the priest, Rev. Gerhard Maria Wagner, to give up the promotion.

In January, Benedict promoted the 54-year-old Wagner to the post of auxiliary bishop in Linz, Austria's third largest city.

The move sparked an outcry from Austrian Catholics and church groups who argued that the decision could motivate people to leave the Catholic Church.

Wagner had questioned whether the "noticeable" increase of natural disasters such as Hurricane Katrina - which devastated New Orleans in 2005 - was a result of pollution caused by humans or the result of "spiritual pollution."

Writing of New Orleans in a 2005 parish newsletter (which was later excerpted on the Austrian site Kath.net, Wagner said, "The amoral conditions in this town are indescribable," and remarked that the storm and accompanying floods (which killed more than 1,800 people) had also destroyed nightclubs, brothels and abortion clinics.

Following the controversy, Wagner said last month that he was giving up the job as auxiliary bishop.

He said he considered his decision to be in the interest of the church and that he looked forward to continuing his job as pastor in the Upper Austrian town of Windischgarsten.

The Vatican's brief announcement Monday said the pope had "exonerated ... Wagner from accepting the office of Linz auxiliary bishop."

The Vatican's spokesman, the Rev. Federico Lombardi, told reporters that Wagner had put forth his request to give up the job to the Vatican, and that the pope had accepted it.

Linz Diocesan Bishop Ludwig Schwarz said the Vatican's confirmation "officially brings to a close a turbulent period for the Linz diocese and the Austrian church."

Wagner's promotion was one of two recent controversial decisions by the Vatican that led to unusually open criticism of Vatican policy, even from top Roman Catholic churchmen.

The other involved lifting the excommunication of a bishop who had said that no Jews were gassed during the Holocaust.

Later, the Vatican distanced itself from British Bishop Richard Williamson's remark and demanded that he recant it.

Lifting the excommunication of Williamson and three fellow members of the traditionalist Society of St. Pius X had been part of the pope's effort to reach out to ultraconservatives.