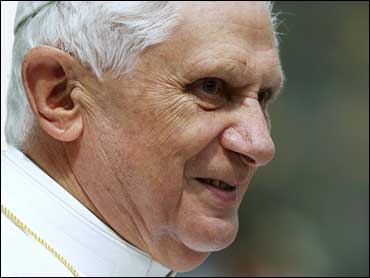 Pope Benedict XVI has reasserted the universal primacy of the Roman Catholic Church, approving a document released Tuesday that says Orthodox churches were defective and that other Christian denominations were not true churches.

Benedict approved a document from his old offices at the Congregation for the Doctrine of the Faith which restates church teaching on relations with other Christians. It was the second time in a week that the pope has corrected what he says are erroneous interpretations of the Second Vatican Council, the 1962-65 meetings that modernized the church.

In the document — formulated as five questions and answers — the Vatican seeks to set the record straight on Vatican II's ecumenical intent, saying some contemporary theological interpretation had been "erroneous or ambiguous" and had prompted confusion and doubt.

It restates key sections of a 2000 document the pope wrote when he was prefect of the congregation, "Dominus Iesus," which set off a firestorm of criticism among Protestant and other Christian denominations because it said they were not true churches but merely ecclesial communities and therefore did not have the "means of salvation."

In the new document and an accompanying commentary — which were released as the pope vacations here in Italy's Dolomite mountains — the Vatican repeated that position.

"Christ 'established here on earth' only one Church," the document said. The other communities "cannot be called 'churches' in the proper sense" because they do not have apostolic succession — the ability to trace their bishops back to Christ's original apostles.

The Rev. Sara MacVane of the Anglican Centre in Rome, said there was nothing new in the new document.

"I don't know what motivated it at this time," she said. "But it's important always to point out that there's the official position and there's the huge amount of friendship and fellowship and worshipping together that goes on at all levels, certainly between Anglican and Catholics and all the other groups and Catholics."

The document said Orthodox churches were indeed "churches" because they have apostolic succession and that they enjoyed "many elements of sanctification and of truth." But it said they lack something because they do not recognize the primacy of the pope — a defect, or a "wound" that harmed them, it said.

"This is obviously not compatible with the doctrine of Primacy which, according to the Catholic faith, is an 'internal constitutive principle' of the very existence of a particular Church," the commentary said.

Despite the harsh tone of the document, it stresses that Benedict remains committed to ecumenical dialogue.

"However, if such dialogue is to be truly constructive it must involve not just the mutual openness of the participants but also fidelity to the identity of the Catholic faith," the commentary said.

The document, signed by the congregation prefect, American Cardinal William Levada, was approved by Benedict on June 29, the feast of Sts. Peter and Paul — a major ecumenical feast day.

There was no indication about why the pope felt it necessary to release the document, particularly since his 2000 document summed up the same principles. Some analysts suggested it could be a question of internal church politics, or that it could simply be an indication of Benedict using his office as pope to again stress key doctrinal issues from his time at the Congregation.

In fact the only theologian cited by name in the document as having spawned erroneous interpretations of ecumenism was Leonardo Boff, the Brazilian who was a target of the former Cardinal Ratzinger's crackdown on liberation theology in the 1980s.

Regardless, the timing of the document came less than four days after Benedict revisited another key issue from Vatican II, as he revived the Latin Mass. Traditional Catholics cheered the move, but more liberal ones called it a step back from Vatican II.

Benedict, who attended Vatican II as a young theologian, has long complained about what he considers the erroneous interpretation of the council by liberals, saying it was not a break from the past but rather a renewal of church tradition.