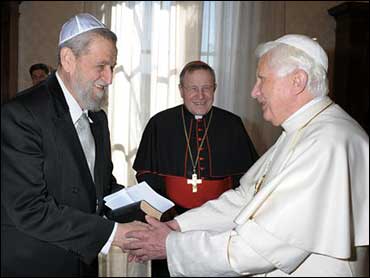 Pope Benedict XVI has made an unusual public acknowledgment of Vatican mistakes and turmoil in his church over an outreach to ultraconservatives that led to his lifting the excommunication of a Holocaust-denying bishop.

In an attempt to end one of the most serious crises of his papacy, he said in a letter released Thursday that the Vatican must make greater use of the Internet to prevent other controversies.

The Vatican took the rare step of releasing the German-born pope's personal account of the incident addressed to Catholic bishops around the world.

It recalled his apology in 2006 after his remarks linking Islam to violence caused a storm in the Islamic world. He said then he was "deeply sorry."

Popes are traditionally protective of their office and their aides but the last time a pope explicitly proclaimed infallibility on matters of faith and morals was in 1950.

The Vatican has said that Benedict did not now know that British-born Bishop Richard Williamson was a Holocaust denier when he lifted his excommunication on Jan. 24.

Benedict, in an implicit criticism of aides, said that not searching the Internet for information before lifting the excommunications Jan. 24 was an "unforeseen mishap" that caused tensions between Christians and Jews.

Williamson had denied in an interview with Swedish TV broadcast earlier in January that 6 million Jews were killed by the Nazis. He said about 200,000 or 300,000 were murdered and none were gassed. His excommunication was lifted along with three other ultraconservative bishops' in an attempt to bring dissidents back into the mainstream church.

Instead, the move outraged many Jews and Catholics, including bishops in Benedict's native Germany, when Williamson's views became widely known and the interview was widely viewed on the Internet. German Chancellor Angela Merkel, a Protestant, demanded clarification from Benedict.

The pope said the controversy resulted from an "unforeseen mishap" that made his efforts of "mercy" toward the excommunicated bishops seem like a repudiation of reconciliation between Christians and Jews.

"That this overlapping of two opposing processes took place and momentarily upset peace between Christians and Jews, as well as peace within the church, is something which I can only deeply deplore," he wrote.

Benedict wrote that he was saddened that even who should know better "thought they had to attack me with open hostility."

The pope thanked "all the more our Jewish friends" for understanding his commitment to friendship.

Benedict also held a meeting Thursday with a delegation of Israel's chief rabbinate as part of regularly planned consultations to discuss aspects of Catholic and Jewish religious teachings.

The pope said he hopes his visit to the Holy Land in May can foster understanding among religions. He said he remains committed to a landmark document issued by the Second Vatican Council that states the church deplores all forms of anti-Semitism.

"My intention is to pray especially for the precious gift of unity and peace both within the region and for the worldwide human family," Benedict said of his May 8-15 visit to the Holy Land.

"May my visit also help to deepen the dialogue of the Church with the Jewish people so that Jews and Christians and also Muslims may live in peace and harmony in this Holy Land," he said.

Rabbi Shear-Yashuv Cohen of Haifa called the audience "a special experience ... because it marks an end of a crisis."

In the letter, Benedict defended his attempts to bring ultraconservative faithful loyal to the anti-modernization movement of the late Archbishop Marcel Lefebvre back into the church's fold.

But he acknowledged that "another mistake, which I deeply regret" was made in not properly explaining his intentions and the limits of the procedure and that some groups had accused him of seeking to "turn back the clock."

"That the quiet gesture of extending a hand gave rise to a huge uproar, and this became exactly the opposite of a gesture of reconciliation, is a fact which we must accept," Benedict said.

But he said the church cannot be indifferent to a movement that counts 491 priests, 215 seminarians and six seminaries.

"Should we casually let them drift farther from the church?" he asked.