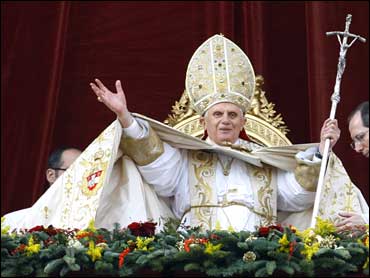 Pope Benedict XVI issued a Christmas Day appeal Tuesday to political leaders around the globe to find the "wisdom and courage" to end bloody conflicts in Darfur, Iraq, Afghanistan and the Congo.

Benedict delivered his traditional "Urbi et Orbi" speech - Latin for "to the city and to the world" - from the central balcony of St. Peter's Basilica, blessing thousands of people gathered in the square below under a brilliant winter sun.

Wearing gold-embroidered vestments and a bejeweled bishops' hat, or miter, Benedict urged the crowd to rejoice over the celebration of Christ's birth, which he said he hoped would bring consolation to all people "who live in the darkness of poverty, injustice and war."

He mentioned in particular those living in the "tortured regions" of Darfur, Somalia, northern Congo, the Eritrea-Ethiopia border, Iraq, Lebanon and the Holy Land, Afghanistan, Pakistan, Sri Lanka and the Balkans.

"May the child Jesus bring relief to those who are suffering and may he bestow upon political leaders the wisdom and courage to seek and find humane, just and lasting solutions," he said.

Beyond those conflicts, Benedict said he was turning his thoughts this Christmas to victims of other injustices, citing women, children and the elderly, as well as refugees and victims of environmental disasters and religious and ethnic tensions.

He said he hoped Christmas would bring consolation to "those who are still denied their legitimate aspirations for a more secure existence, for health, education, stable employment, for fuller participation in civil and political responsibilities, free from oppression and protected from conditions that offend human dignity."

Such injustices and discrimination are destroying the internal fabric of many countries and souring international relations, he said.

In a nod to his engagement with environmental concerns, the pontiff also noted that the number of migrants and displaced people was increasing around the globe because of "frequent natural disasters, often caused by environmental upheavals."

The pontiff delivered his message just hours after ushering in Christmas by celebrating Midnight Mass in St. Peter's Basilica.

Benedict followed his speech with his traditional Christmas Day greetings - this year delivered in 63 different languages, including Mongolian, Finnish, Arabic, Hebrew, Swahili, Burmese, and in a new entry for 2007, Guarani, a South American Indian language.

As he finished, the bells of St. Peter's tolled and the Vatican's brightly outfitted Swiss Guards stood at attention as a band played and a crowd numbering in the tens of thousands waved national flags and cheered.

Earlier, during the Midnight Mass, the pope urged the faithful to set aside time in their lives for God and the needy.

Echoing a theme he has raised about an increasingly secular world, Benedict said that many people act as if there is no room for spiritual matters in their lives.

"Man is so preoccupied with himself, he has such urgent need of all the space and all the time for his own things, that nothing remains for others, for his neighbor, for the poor, for God," he said.

Benedict also use the homily to link the Christmas message to the church's growing environmental concerns, referring to early theologians who interpreted Christ's role as also a healer of the Earth and universe.

"He came to restore beauty and dignity to creation, to the universe: This is what began at Christmas and makes the angels rejoice. The Earth is restored to good order by virtue of the fact that it is opened up to God ... Thus Christmas is a feast of restored creation."

Under Benedict, the Vatican has been taking steps toward greater environmental action, a key element of which has been its involvement in reforestation project aimed at offsetting its carbon emissions.

In the homily, delivered in Italian in front of thousands packing the basilica, Benedict asked the faithful to make room for God, as well as the less fortunate, in their lives.

Benedict drew parallels between what he perceives as modern society's refusal of God and the story of how Jesus was born in a manger because there was no space for his family at a nearby inn.

"In some way, mankind is awaiting God, waiting for him to draw near. But when the moment comes, there is no room for him," he said.

But the message of Jesus' birth, which is marked on Christmas, is also that "God does not allow himself to be shut out," Benedict said. "He finds a space, even if it means entering through the stable; there are people who see his light and pass it on."

Earlier, as Midnight Mass began, Benedict blessed the crowd of pilgrims, Romans and tourists, as he walked in a procession up the main aisle to the central altar, which was decorated with red poinsettia flowers.

Four children, some in native costume from their countries, brought flowers to the altar, placing them near a statue depicting baby Jesus as Benedict, dressed in white and gold-colored robes, joined a choir in a hymn.

For those unable to get into the midnight service there were giant screens set up in St. Peter's Square, which was made festive with a twinkling Christmas tree and the Vatican's Nativity scene.

Officials unveiled the life-size Nativity on Monday, revealing the statues of Mary and Joseph, Jesus' parents, in a huge house-like structure located next to the Vatican's giant, twinkling Christmas tree.

This year, the scene of Jesus' birth was depicted in a recreation of Joseph's Nazareth home rather than the traditional manger in Bethlehem. Officials at the unveiling said the shift underscored the idea that Jesus was born not just in a single place, but everywhere and for everyone.

Hours before Midnight Mass, Benedict briefly appeared at his studio window to light a candle as a symbol of peace, blessing the crowd with the light before leaving it on the sill.