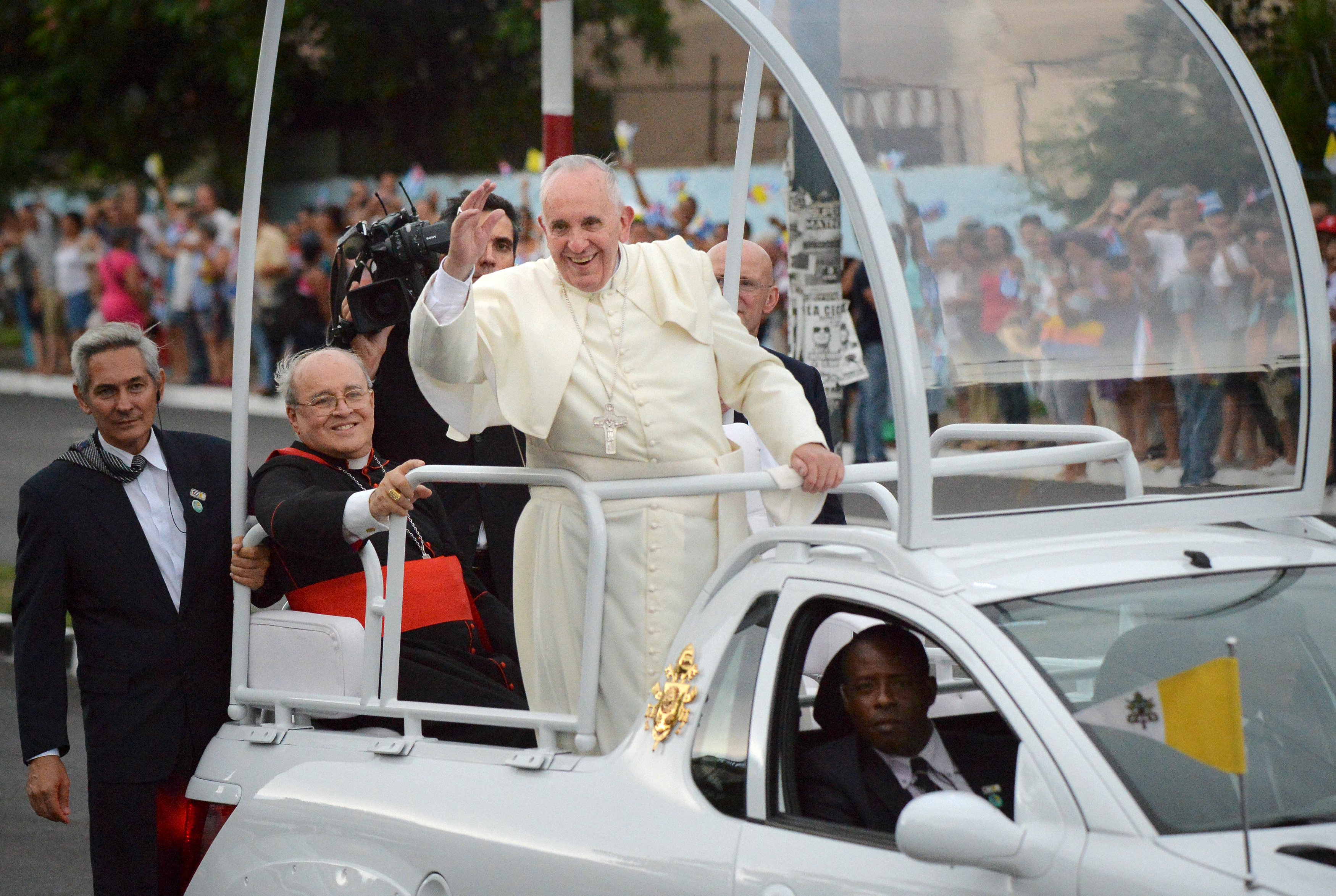 HAVANA -- In his first speech upon arriving in Cuba, Pope Francis called for religious and political freedom in the island nation, and urged Cuba to become more integrated with the rest of the world.

The Pope delivered the speech at the welcome ceremony at Havana airport, in the presence of Cuban president Raul Castro and other dignitaries.

"Today we renew the bonds of cooperation and friendship, so that the Church can continue to support and encourage the Cuban people in its hopes and concerns, with the freedom, the means and the space needed to bring he proclamation of the Kingdom to the existential peripheries of society," he said.

The Pope said he would pray to Mary "for all her Cuban children and for this beloved nation, that it may travel the paths of justice, peace, liberty and reconciliation," another subtle call for human rights reform in the island nation.

These subtle calls for religious and political reform are not likely to satisfy those who believe Pope Francis should speak strongly, not diplomatically, in pushing for greater freedom in Cuba.

But Austen Ivereigh, author of "The Great Reformer: Francis and the Making of a Radical Pope," says the Pope's words were indeed powerful.

"Within the Cuban context, I was impressed by how strong the speech was, and how rich in pointed message. I think what he was doing in the speech is carving out a new basis for Cuba's political future, one that starts from Cuba's deep desire for independence and social justice, but resting on Christian tradition," Ivereigh told CBS News.

Although relations are slowly improving, the Catholic Church in Cuba operates under strict restrictions. There are only six Catholic schools in the entire country. In February of this year, the state allowed the first church to be built in 56 years.

In his speech, the Pope praised both Cuba and the USA for normalizing relations after decades of estrangement, urging political leaders to persevere "as an example of reconciliation for the entire world."

Francis also quoted Pope John Paul II, who said during his visit in 1998, "May Cuba, with all its magnificent potential, open itself to the world, and may the world open itself to Cuba."

In a move sure to irk dissidents and Cuban emigres' to the United States, the Pope asked Raoul Castro to "convey my sentiments of particular respect and consideration to your brother Fidel." But in the very next sentence, the Pope says he would like his greeting "to embrace all those who, for various reasons, I will not be able to meet, and to Cubans throughout the world."

"He's recognizing Fidel as the leader of the Cuban people, and following the line adopted over many decades by the Cuban bishops: reform, not overthrow," says Ivereigh. "But the Pope balanced that out by mentioning all those who couldn't come immediately after, a deliberate reference to dissidents and the Cuban exiles."

Past papal visits to Cuba have resulted in positive changes for the church. After Pope John Paul II's visit, the Cubans reinstated Christmas as a holiday. And after Pope Benedict XVI's visit in 2012, the Cubans were allowed to celebrate Good Friday.

Although the majority of Cubans are baptized, actual church attendance is estimated to be below five percent, reflecting the country's long history of Catholic repression. After the communist state was established in 1961, churches were shut, religious institutions like schools and hospitals were closed down, and church properties were expropriated.

In 1992, Cuba abolished state atheism and guaranteed religious freedom in its constitution. But critics say there are laws that restrict freedom of association, expression and assembly, all fundamental to organized religious expression.