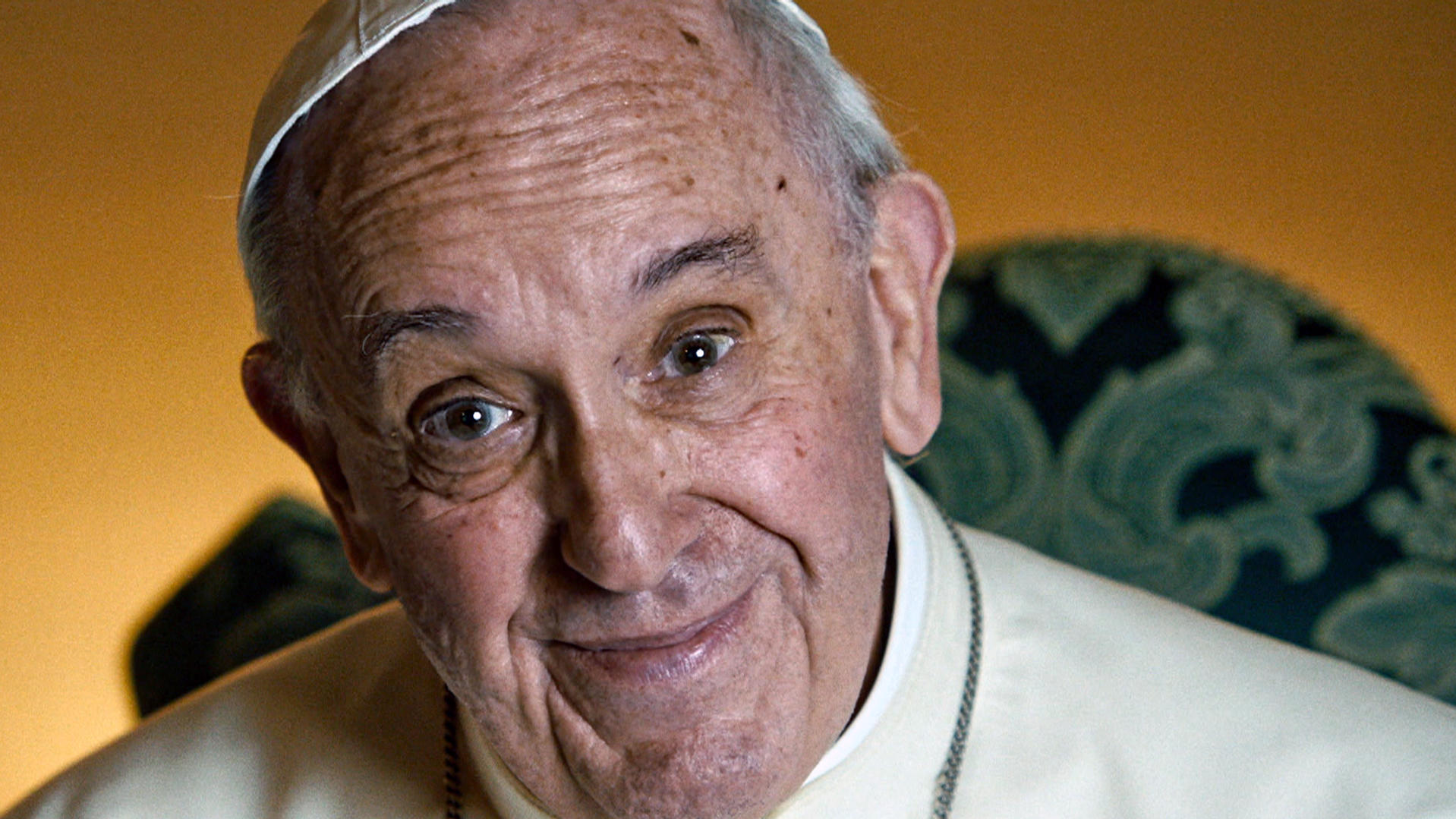 A German experimental filmmaker -- and a lapsed Catholic at that -- is hardly the conventional choice for the Vatican to hand-pick as the pope's documentarian. But Pope Francis has, you might say, excommunicated convention.  Five years on the job, the 266th pope is both uncommonly popular and uncommonly polarizing. He's taken on sweeping global issue -- climate change, poverty, immigration -- though some believe it's come at the expense of more traditional Catholic concerns. This plays out in a film being released this week directed by the auteur Wim Wenders. We got an early look at the film, titled "Pope Francis -- A Man of his Word," and can report that it's an intimate portrait of a new kind of pope. We usually voice-over foreign language speakers, but decided to keep the film's subtitles and musical score so you can hear the pope in his native tongue, and at his natural pace, as he gives new zest to the word "pontificate."

Pope Francis (Spanish with English subtitles): The world today is mostly deaf. And I think that among ourselves, the priests, there are many deaf ones. I'm talking about getting involved in people's lives, I Am talking about closeness. Talk little, listen a lot, say just enough, and always look people in the eye.

It was Pope Francis himself who both greenlit this film and agreed to be the star. In a series of interviews -- unprecedented in length and scope -- he spoke spontaneously on matters both spiritual and material. Entirely without notes, and largely without filter.

Pope Francis (Spanish with English subtitles): The way to escape consumerism, this corruption, this competitiveness, this being enslaved to money, is the concreteness of day-to-day work, is tangible reality!

For this most unusual documentary, the Vatican didn't go in-house, it went 'art house.'  Wim Wenders' eclectic body of work includes "Buena Vista Social Club," an infectious documentary about a group of aging Cuban musicians. And "Wings of Desire," a fantasy feature about angels keeping watch over Berlin, Wenders' longtime home. A top Vatican official, who just happened to be a movie buff, had the idea of commissioning Wenders to make his next film with the sitting pope.

Wim Wenders: I thought it was more intimidating than flattering.

Jon Wertheim: You did?

Wim Wenders: And you have carte blanche.

Wim Wenders: Carte blanche. And you can even write the concept yourself with the Pope, because I'm not interested in a biography of the man. He's too interesting for that. I really want the film to be about what he stands for. And that he can only represent himself. So I really wanna make a film with him. I realize it was gonna be one of a kind. But also, sleepless nights.

From those first plumes of smoke in 2013, signifying Francis' papacy, Vatican cameras began chronicling the pope's every move.

Wenders was granted access not just to Francis, but to an extraordinary video library. He was able to combine his interviews with rare Vatican television footage. He oversaw months of editing, and added his own cinematic touches and writing, which he narrated himself.

Saint Francis of Assisi is the patron saint of the environment. To honor his namesake, Pope Francis devoted his 2015 Encyclical -- a 184-page letter to the church faithful -- to the technology, science and data behind climate change. This pope speaks openly of evolution, and says, quote, "The biblical story of creation is a mythical form of expression." He likens the neglect of the Earth to the neglect of the poor.

The film depicts the extent of that abuse. Pope Francis punctuates it with a direct and unmistakable message.

Pope Francis (Spanish with English subtitles): And we are all responsible! No one can say: "I have nothing to do with this."

Francis was elevated to his position when his predecessor, Pope Benedict, became the first pope in 600 years to resign, citing declining health. Now 81, Pope Francis has appealed personally to hundreds of millions in dozens of countries. He often balances gravity with levity, as he did during this trip to Philadelphia, where he visited a prison, and spoke at a conference celebrating the family.

Pope Francis (Spanish with English subtitles): We live with the accelerator down from morning to night. This ruins mental health, spiritual health, and physical health. More so: it affects and destroys the family, and therefore society. "On the seventh day, He rested." What the Jews followed and still observe, was to consider the Sabbath as holy. On Saturday you rest. One day of the week, that's the least! Out of gratitude, to worship God, to spend time with the family, to play, to do all these things. We are not machines!

Jon Wertheim: Did he realize how intimate this was gonna look?

Wim Wenders: He understood this whole system really well and stuck to it, and did it perfectly.

The "system" – first developed by the documentarian Errol Morris – entailed projecting Wenders' face on a screen in front of the lens, so the pope could look the director face-to-face as they spoke. Wenders took us into his edit room to show us some behind-the-scenes footage.

Jon Wertheim: No, no trailer.

Wim Wenders: No trailer, no. (laughs)

Jon Wertheim: The easiest subject you're ever gonna work with.

"I can say one thing: he is the most fearless man I ever met."

Wenders interviewed the pope four times for more than eight hours total. They both agreed this spot in the Vatican gardens was their favorite setting. But it didn't come without challenges.

Wim Wenders: And now you already hear the bloody parrots.

Jon Wertheim: Were you warned that the Vatican's parrots might interrupt the shoot?

Wim Wenders: No, even the Vatican itself didn't know that they had these…

Jon Wertheim:  Was this project top secret? Did people know this was…

Wim Wenders: I don't think anybody knew. We shot under the radar.

One possible reason – these are fraught times for the church. Francis has been critical of the Vatican's bloated bureaucracy, and traditionalists have pushed back, accusing him of neglecting his spiritual role. All this plays out amid the church's unrelenting sexual abuse scandals. When Wenders inevitably raised the subject, it brought out a simmering rage.

Wim Wenders: We saw this anger once really very strong. And it was almost physical, it was the way it translated. And that was my question about pedophilia and there he got so worked up. And there was a very angry man speaking into the camera.

Pope Francis (Spanish with English subtitles): Towards pedophilia, zero tolerance! And the Church must punish such priests who have that problem, and bishops must remove from their priestly functions anyone with that disease, that tendency to pedophilia, and that includes to support the legal action by the parents before the civil courts. There is no other way out of this! Zero tolerance, because it's a crime, no, worse! It's leaving them alive, but destroyed.

And yet on this point too, Francis has his critics, who believe he could do more to confront the abuse.

Jon Wertheim: You say he's not a politician, but he has a constituency. Do you think he's influenced by or even aware of public opinion?

Wim Wenders: I can say one thing: he is the most fearless man I ever met.

Wim Wenders: Fearless. And he is not influenced by polls or whatever. I don't think he would ever consider any public opinion over something he means and he's convinced of. He's totally fearless. Because he has a lot of opposition.

Jon Wertheim: Do you think he's aware of that?

Wim Wenders: I think he's totally aware of that.

That fearlessness was on display in the interviews. Wenders could ask any question he thought apt. Imagine asking the pope why God allows children to suffer.

Pope Francis (Spanish with English subtitles): It's a question that we all ask ourselves. And if you ask me why children suffer, the only thing I can say is: "Look at the Child of God on a cross." I don't know what other answer to give you. But let's talk about why God allows it, which is the core of the question. Quite simply, because he created us as persons, and as such: free! God is respectful of freedom. He allowed his son to be killed on the cross. The game of human freedom: God risked a lot here! It would more dishonor man, if God could take away his freedom, than if man, with his freedom, committed a crime.

It's precisely this kind of candor – without dogma—that  Wenders found so appealing. A filmmaker for more than 50 years, he says this project gratified him like no other. As for his star, he noticed that Pope Francis projects a quality that even the best actors can't fake: presence — a rare combination of charisma and authenticity. But who knew that the sitting pope could also moonlight as a screenwriter.

Wim Wenders: In the last talk, I had told him, "We don't really have an ending for the film. I need a moment that will close the movie." And he nodded, and he looked. And then we started the interview. And at one moment, I realized now he was on it. He was on it. And I realized it was consciously so, and it was what I had asked. But it came from a very different angle.

Pope Francis (Spanish with English subtitles): An artist is an apostle of beauty, who helps others live. Let's think of all the artists who achieved that. But also all of us! And if you ask me: "Give me an example of beauty, simple everyday beauty, with which we can help others feel better and be happier," two things come to my mind. A smile, and a sense of humor.

And in keeping with that, this shepherd of more than a billion Catholics is happy to let the world in on a small secret.

Pope Francis (Spanish with English subtitles):  Here I make a personal confession. Every day, after my morning prayer, I recite Saint Thomas More. His "Prayer for Good Humor."  'Sense of humor.' It starts in a way that makes you laugh. "Give me, oh Lord, a good digestion, but also something to digest." That's it.