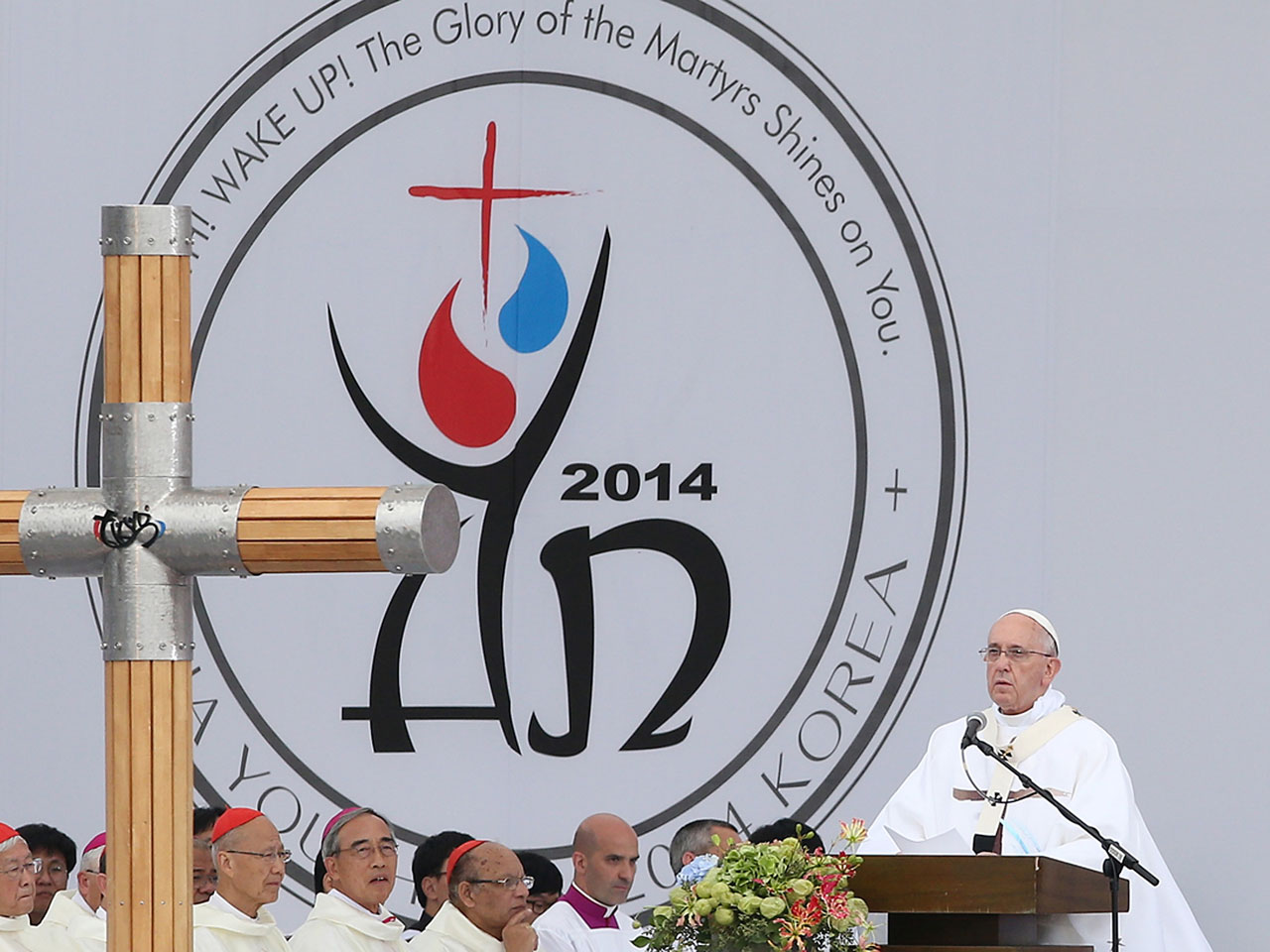 HAEMI, South Korea - Pope Francis made his strongest gesture yet to reach out to China on Sunday, saying he wants to improve relations and insisting that the Catholic Church isn't coming in as a "conqueror" but is rather a partner in dialogue.

Francis outlined his priorities for the Catholic Church in Asia during a meeting of about 80 of the region's bishops, urging them to engage with people of different cultures empathetically.

"In this spirit of openness to others, I earnestly hope that those countries of your continent with whom the Holy See does not yet enjoy a full relationship may not hesitate to further a dialogue for the benefit of all," he said.

Then deviating from his text, he added: "I'm not talking here only about a political dialogue, but about a fraternal dialogue. These Christians aren't coming as conquerors, they aren't trying to take away our identity." He said the important thing was to "walk together."

The Vatican spokesman, the Rev. Federico Lombardi, said the pope's remarks were "obviously a sign of goodwill for dialogue" with China as well as the other countries in Asia with which the Vatican doesn't have diplomatic relations: North Korea, Vietnam, Myanmar, Laos, Bhutan and Brunei. "This offer of the pope for dialogue is to all these lands and not just one, even if China is the biggest," he said.

He acknowledged that Francis has so far refrained from making any outwardly political statement about China, which counts some 12 million Catholics, but that the speech was a clear affirmation of a desire for dialogue. It was also a message to the region's bishops that they can sow the seeds for dialogue through charitable works and educational services even before official diplomatic relations with the Holy See are established.

China cut relations with the Vatican in 1951, after the Communist Party took power and set up its own church outside the pope's authority. China persecuted the church for years until restoring a degree of religious freedom and freeing imprisoned priests in the late 1970s. The Vatican under then-Pope Benedict XVI sought to improve ties by seeking to unify the state-sanctioned church with the underground church still loyal to Rome.

Vatican-China ties have already broken new ground on Francis' first Asian trip, with Beijing agreeing to let Francis' Alitalia charter fly through its airspace; when St. John Paul II last came to South Korea in 1989, Beijing refused to let him fly overhead. With the fly-by confirmed, Francis sent the traditional greetings he sends to the leadership of countries he flies over. That said, there have been reports that some Chinese Catholics who wanted to participate in the Asian Catholic youth festival here were prevented from coming.

For the Vatican, the main stumbling block in relations remains the insistence of the official Chinese Catholic Patriotic Association on naming bishops without papal consent. For China, the naming of bishops is a matter of its national sovereignty, while it also objects that the Holy See has diplomatic relations with Taiwan.

Lombardi sought to stress that the Vatican was always open to dialogue, and was not interested in questions of political sovereignty. "Authorities have not to fear the Holy See as a power that comes to exercise its foreign powers in the land, but is a religious authority that is of another order than the political and civil authorities," he said.

There was no immediate response Sunday from Beijing authorities - either from the government or the Patriotic Association. But earlier in the week, after the pope's greetings to China's leadership were sent, the Foreign Ministry spokeswoman, Hua Chunying, told the government's China Daily that "we have noticed the remarks of Pope Francis."

"China has always been sincere in improving relations with the Vatican and has been making positive efforts for that," she said. The comments don't appear on the government website, however.

The church in North Korea is under tight government control and is not recognized by the Vatican. Organizers of the papal trip had invited a delegation from the North to attend a Mass that Francis is celebrating on Monday for peace and reconciliation on the Korean Peninsula, but Pyongyang authorities declined the invitation.

In other communist nations such as Vietnam, governments exert tremendous control over the Catholic Church. There are 6 million Roman Catholics in Vietnam, the second-largest Catholic community in Southeast Asia after the Philippines, but tensions have existed for decades over church property seized by the Communists and other issues.

Francis' diplomatic outreach Sunday followed another gesture of solidarity earlier in the morning: He baptized the father of one of the victims of the sinking of a South Korean ferry that killed more than 300 people, most of them high school students.

Lee Ho Jin took the Christian name "Francis" during the rite, which the pope administered in the Vatican's embassy in Seoul, according to Lombardi.

Lee had been one of a dozen relatives of victims and survivors of the April ferry sinking who met privately with the pope Friday. He asked to be baptized and Francis agreed.

Francis has gone out of his way to show support for the families of the victims of the ferry sinking, who are demanding an independent inquiry into the tragedy. Aside from meeting publicly and privately with them, he has worn a symbolic yellow ribbon on his cassock in solidarity for three straight days.

Lombardi has said Francis isn't getting involved in the families' demands for a parliamentary inquiry, but is merely offering them support and prayers. He said Francis was particularly pleased to have been asked to perform a baptism since Korea's Catholic Church has been growing steadily thanks in large part to an unusually high number of adult baptisms each year.

Francis' final event Sunday was to close the Asian Youth Day festival with a Mass in a 15th century fortress in Haemi, about 60 miles southwest of Seoul, where some 132 Korean martyrs were tortured and killed in the 18th and 19th centuries.

A steady rain turned the castle grounds into giant mud puddles, but the skies cleared by the time Francis arrived and was greeted by the enthusiastic crowd.