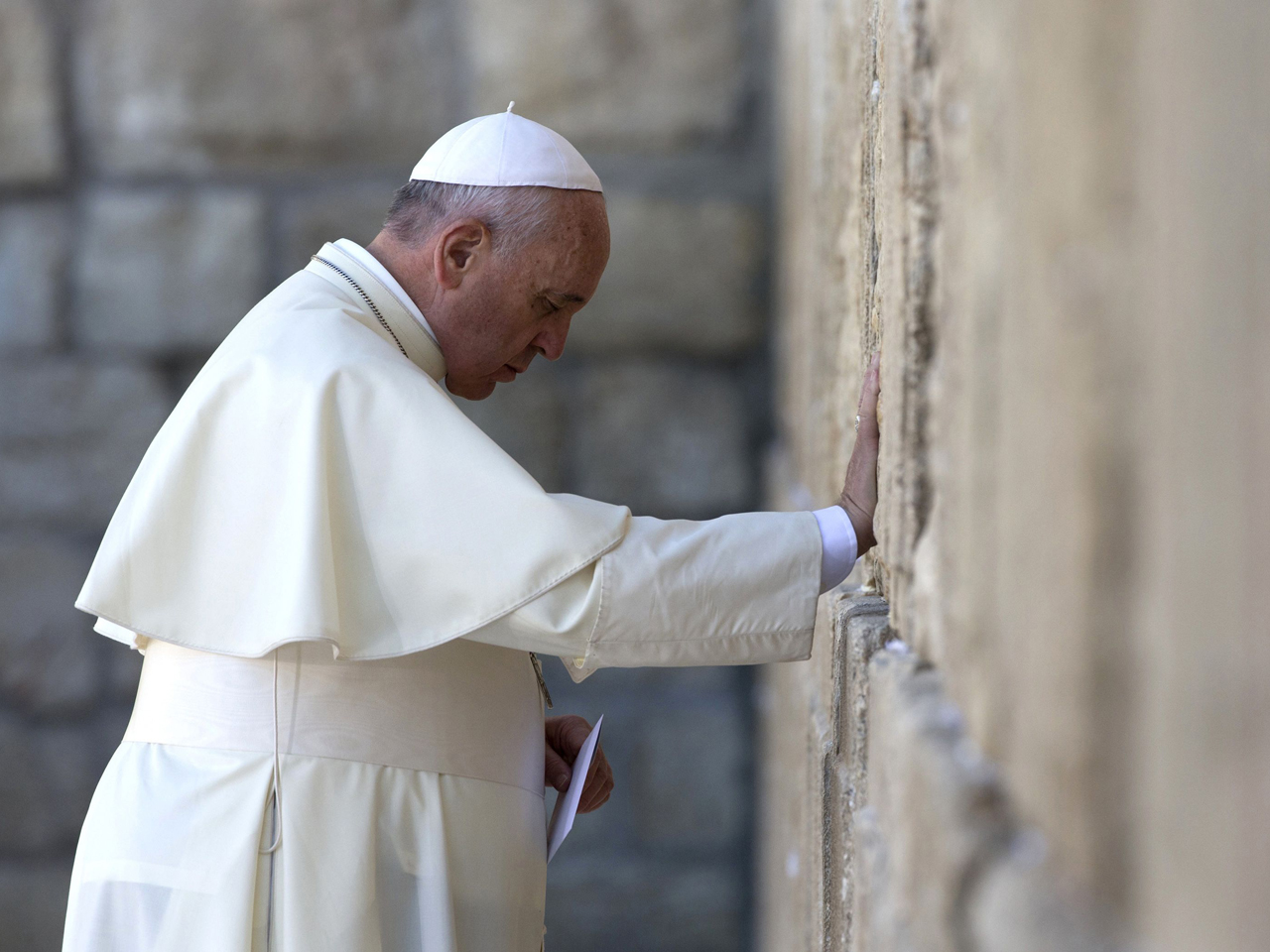 JERUSALEM -- Pope Francis prayed on Monday at Jerusalem's Western Wall, the holiest place where Jews can pray, and deviated from his busy itinerary to visit a memorial to Israeli victims of terrorism as he spent his third and final day in the Middle East honoring Jews.

Francis bowed his head in prayer and touched the wall, the only remains of the biblical Second Temple.

He left a note with the text of the "Our Father" prayer written in his native Spanish in one of the cracks between the stones.

He then embraced his good friend, Argentine Rabbi Abraham Skorka, and a leader of Argentina's Muslim community, Omar Abboud, both of whom joined his official delegation for the trip in a sign of interfaith friendship.

When St. John Paul II visited the Western Wall in 2000, he left a note asking forgiveness for the suffering inflicted on Jews by Christians over history. Pope Benedict XVI's note prayed for peace for Christians, Muslims and Jews alike.

Francis deviated from his packed schedule to visit a memorial to Israeli victims of terrorism before traveling to the Yad Vashem Holocaust memorial. He also laid a wreath at the grave of Zionist visionary Theodor Herzl.

Francis' whirlwind trip has been marked by his surprise invitation to the Israeli and Palestinian presidents to come to the Vatican next month to pray for peace. Both men accepted, and Francis met the outgoing Israeli President Shimon Peres later Monday.

CBS News correspondent Allen Pizzey says the pope's final day in the Middle East saw him perform a delicate dance around the most politically and emotionally charged issues and venues of his three day trip -- and he seemed to handle it deftly.

He started the day by taking off his shoes to enter the Dome of the Rock, the iconic shrine located at the third-holiest spot in Islam. The gold-topped dome enshrines the rock where Muslims believe the Prophet Mohammad ascended to heaven.

The mosque complex, known to Muslims as the Noble Sanctuary and to Jews as the Temple Mount, is at the heart of the territorial and religious disputes between Israel and its Arab neighbors.

Speaking to the grand mufti of Jerusalem and other Muslim authorities, Francis deviated from his prepared remarks to refer not just to his "dear friends" but "dear brothers."

"May we respect and love one another as brothers and sisters!" he said. "May we learn to understand the suffering of others! May no one abuse the name of God through violence!"

The most poignant visit of the day, said Pizzey, was Francis' stop at the Yad Vashem Holocaust memorial.

In an address that was in fact a prayer, Francis used the evocative Hebrew word "Shoah" in reference to the Holocaust, which he called "an enduring symbol of the depths to which human evil can sink," and added, "I beg God that there will never be another such crime."

To underscore his respect int he Jewish state, Francis kissed the hands of half a dozen Holocaust survivors and listened to their stories of horror.

The pope's final day is a whirlwind of activities, from the Dome of the Rock to the Western Wall, to Mount Herzl, the Israeli national cemetery named for the father of modern Zionism, and a speech at Yad Vashem. There will also be meetings with the chief rabbis of Israel, the Israeli president and prime minister, local priests and finally, Mass in the Room of the Last Supper, where Jesus shared his final meal with his disciples before being crucified.

He is due to return to Rome just before midnight.