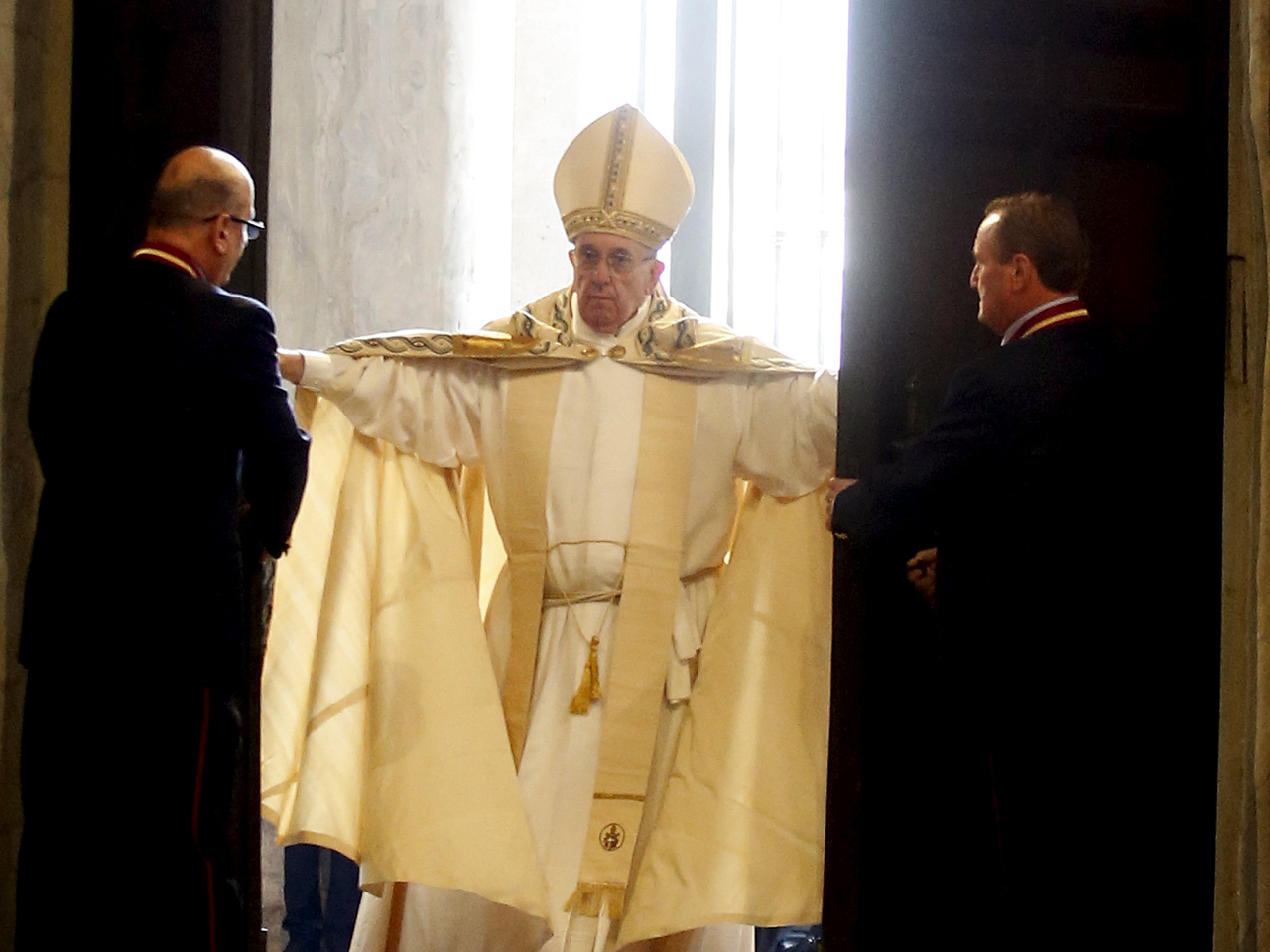 VATICAN CITY -- "This is the door of God... open the doors of justice."

With those words, Pope Francis pushed open the Holy Door of St. Peter's Basilica and officially inaugurated the "Extraordinary Jubilee of Mercy," a special year called by the pope so Catholics everywhere can focus on forgiveness, compassion and mercy, and be forgiven of their sins.

Amid extraordinary security, an estimated 50,000 pilgrims attended the mass that preceded the ceremony, including the Italian president and prime minister. During his homily, Francis called for a church that puts mercy before judgment.

"How much wrong we do to God and his grace when we affirm that sins are punished by his judgment before putting first that they are forgiven by his mercy," he said. "Let us abandon fear and dread... instead, let us live the joy of encounter with the grace that transforms us all."

After the mass, Francis walked to the atrium of the basilica. There, he greeted is predecessor, Pope Emeritus Benedict XVI, with a warm embrace. Francis then pushed the majestic bronze door wide open, prayed silently for a few minutes on the threshold, and walked through. He was followed by a frail Benedict, who was holding a cane. A procession of cardinals, bishops and laity followed.

"To pass through the Holy Door means to rediscover the infinite mercy of the Father who welcomes everyone and goes out personally to encounter each of them," the pope said during the mass.

Holy Doors are normally bricked up, and revealed only on Holy Years (also known as Jubilee Years), which occur about every 25 years to allow each generation access to the pardon.

But the last Jubilee Year was only 16 years ago, in 1999, to mark the arrival of the new millennium. Pope Francis called for an Extraordinary Jubilee to run December 8 through November 20, 2016, with a greatly amplified scope.

Normally, pilgrims pass through the Holy Door at St. Peter's and other designated Roman basilicas to receive indulgence. But for the first time ever, Francis has called on dioceses and shrines around the world to throw open their Holy Doors, so that pilgrims everywhere may be forgiven their sins.

The pope also said prisoners may obtain indulgence in the chapels of their prisons. In addition, Francis has made it easier for women who have had abortions to obtain forgiveness by decreeing that all priests have the authority to absolve them, a faculty usually reserved for bishops because abortion is considered such a grave sin.

Security in St. Peter's Square and the vicinity was extremely tight.

Some 2,000 police patrolled the crowd, as well as Vatican gendarmerie and Swiss guards.

As helicopters flew overhead, pilgrims were made to walk through metal detectors before they reached the square, and a six-mile no-fly zone was instituted over central Rome.