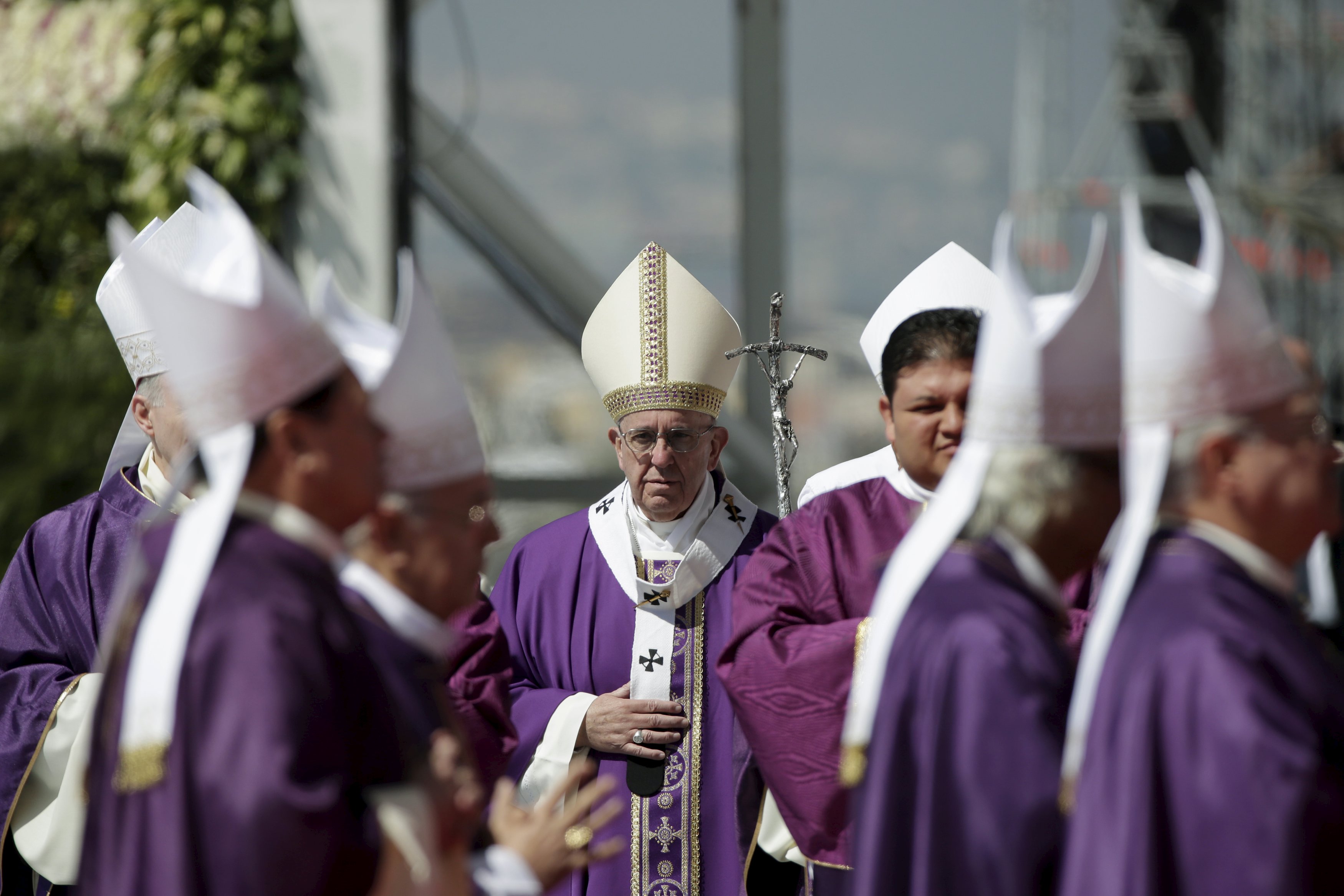 ECATEPEC, Mexico -- Pope Francis condemned the drug trade's "dealers of death" and urged Mexicans to shun the devil's lust for money as he led a huge open-air Mass for more than 300,000 people Sunday in this violence-riddled city.

"Let us get it into our heads: With the devil, there is no dialogue," the pope said at the biggest scheduled event of his five-day visit to Mexico.

Francis brought a message of encouragement on the second full day of his trip to residents of Ecatepec, a poverty-stricken Mexico City suburb of some 1.6 million people where drug violence, kidnappings and gangland-style killings, particularly of women, are a fact of life.

"He's coming to Ecatepec because we need him here," said Ignacia Godinez, a 56-year-old homemaker. "Kidnappings, robberies and drugs have all increased, and he is bringing comfort. His message will reach those who need it so that people know we, the good people, outnumber the bad."

In a clear reference to the drug lords who hold sway in the city's sprawling expanses of cinderblock slums, Francis focused his homily on the danger posed by the devil.

"Only the power of the word of God can defeat him," the pope said.

In a final prayer, he urged Mexicans to make their country into a land of opportunity "where there will be no need to emigrate in order to dream, no need to be exploited in order to work, no need to make the despair and poverty of many the opportunism of a few, a land that will not have to mourn men and women, young people and children who are destroyed at the hands of the dealers of death."

The faithful lined the pope's motorcade route to the huge field where the Mass took place, tossing flower petals as he passed by and cheering with pom-poms in the yellow and white of the Vatican flag.

"He gives us so much love," she said. "He radiates love. We love that he is so simple, so humble."

Vendors sold T-shirts, plates with Francis' image on them, pins, bandanas and cardboard-cutout figures of the pope.

An estimated 100,000 people have been killed and 27,000 have disappeared in gangland violence since President Enrique Pena Nieto's predecessor launched an offensive against drug cartels shortly after taking office in late 2006.

At least 1,554 women have vanished in Mexico State since 2005, according to the National Observatory on Femicide, and last year the government issued an alert over the killings of women in Ecatepec and other parts of the state.

Nevertheless, women who came to see Francis said they felt safe, thanks in part to the huge security presence. The government assigned more than 10,000 police, soldiers and members of the presidential guard to protect the motorcade and Mass.

"I'm protected by my faith and the joy of seeing the pope up close," said Graciela Elizalde, 35, who arrived at the field Saturday evening and spent the night on the street, "and the thugs know that we the good people have come out to take the streets."

She added: "The pope is not going to change things, but at least he will touch the hearts of those who do harm and are trying to destroy the country. He is the 'messenger of peace' because that's exactly what Mexico needs, not just Ecatepec."

However, Maria de la Luz Estrada, coordinator of the National Observatory on Femicide, said she was disappointed that Francis didn't directly condemn violence against women or offer support to families of victims, saying that at the very least he could have made reference to discrimination against women.

"I still feel that he owes us these words," she said.

Conchita Tellez, 65, from the border city of Mexicali, held out hope that Francis can help ease the troubled soul of the country.

"The pope comes to Mexico at a very ugly moment," Tellez said, "and he comes to pray for us and for all those who lost hope and have submerged the country in blood and violence."

Francis' grueling schedule seemed to be taking a toll on him on Saturday, when the 79-year-old pontiff appeared to nod off at an evening Mass and also lost his balance and fell into a chair set up for him. He appeared much livelier Sunday, beaming and waving at the crowds along his route.

As Francis drove down a main boulevard before adoring faithful in central Mexico City, dozens of emotional nuns rushed the metal barricades to salute the popemobile and a group of lay missionaries, mostly teenagers, sang the traditional Mexican folk song "Cielito Lindo."

At his last stop, a pediatric hospital, one girl performed a heartfelt rendition of "Ave Maria" for the pope. Another presented Francis with a handmade Valentine's Day card with a big heart on the front. "You made this?" Francis asked as he accepted it. "Gracias."

The pope bent down and kissed dozens of sick kids, playfully mussing the hair of the older ones. Some posed for selfies with the pope. Several rose from their wheelchairs to embrace him. Francis also played doctor to one little boy, administering medicine from a dropper.

The pope makes a point of stopping at children's hospitals during his foreign trips, both to visit with the kids and to thank the staff for caring for them. While parts of the encounters are televised, Francis also visits bedridden patients in private for more personal encounters.