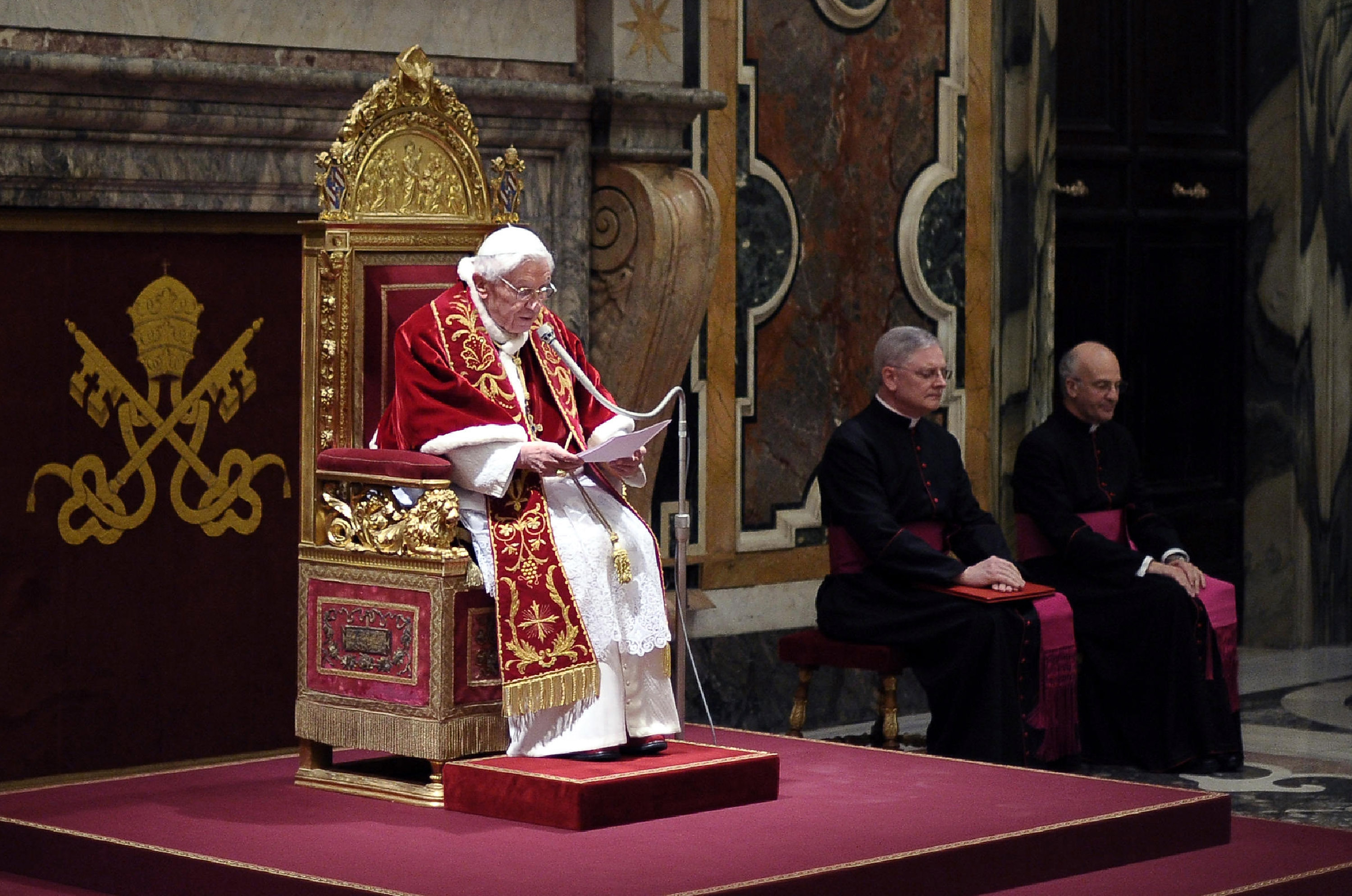 VATICAN CITY Pope Benedict XVI has embarked upon a final, quiet day as pontiff, meeting with his cardinals before he is due to fly off into retirement.

Benedict briefly addressed 144 cardinals gathered in the Clementine Hall of the Apostolic Palace, thanking them again for their support and saying that in the turnout for his final general audience the previous day, "we saw the spirit of Christ... The Church will rise again and be full of souls, the Church will grow."

During his remarks, he pledged his "unconditional reverence and obedience" to the man who becomes his successor.

He then gave a blessing, and personally greeted each of the cardinals in attendance, shaking their hands and exchanging a few words as they approached him in turn.

Shortly before 5 p.m. (11 a.m. Eastern), Benedict will leave the palace for the last time as pope, be driven the short distance to the helipad on the top of the hill in the Vatican gardens and fly by helicopter to the papal retreat at Castel Gandolfo south of Rome. The Vatican said he would spend the hours before his departure having lunch and resting.

CBS News will air a Special Report beginning at 10:30 a.m. Eastern with live coverage of Benedict's flight to Castel Gandolfo, and CBSNews.com will stream the entire event live, until the pope retreats behind the castle doors.

There, at 8 p.m. (2 p.m. Eastern) — the exact moment Benedict's resignation goes into effect — the doors of the palazzo will close and the Swiss Guards in attendance will go off duty, their service protecting the pope now finished.

On Wednesday, Benedict gave his final general audience in St. Peter's Square at the Vatican, addressing the faithful as pontiff for one of the last times, and CBS News correspondent Allen Pizzey says the normally shy pope made the most of it -- pausing to bless about a half dozen babies thrust toward him on the Popemobile even before taking the altar.

Benedict thanked the estimated 150,000 thousand people gathered before him, and said he was "fully aware" of the seriousness and novelty of the situation his retirement had presented the Catholic world.

Many of the cardinals -- the so-called princes of the Church -- who will soon be tasked with choosing Benedict's successor were in the square to hear him speak.

Pizzey described the job that his replacement will inherit as being like a ship tossed on stormy seas, a clear acknowledgement of the difficulties he has faced during his near-eight-year papacy. He went so far as to say that, at times, it seemed like "the Lord was sleeping."

From the point when the doors of Castel Gandolfo close behind him on Thursday, the Vatican says Pope Benedict XVI -- who will be known in his retirement as Pope Emeritus -- will essentially shrink away into a quiet life of prayer and meditation.

However, Pizzey notes that while Benedict will be banned from making public statements in his retirement, it is widely expected that his successor may take advantage of having someone nearby with whom to consult on the job at hand.