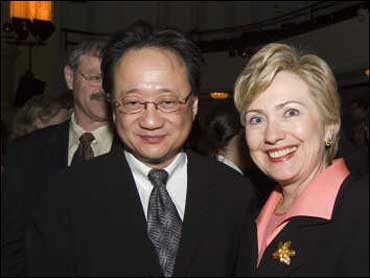 Wayne Watson loved microwave popcorn so much he would eat at least two bags each night, breathing in the steam from the just-opened package, until doctors told him it may have made him sick.

Watson, whose case of "popcorn lung" is the sole reported case of the disease in a non-factory worker, said he is convinced his heavy consumption of popcorn caused his health problems.

"You know, it's one of those things that you kind of shake your head and say, how can anybody eat that much popcorn? But it was about two bags a day every day for about ten years," Watson told Early Show co-anchor Julie Chen

Popcorn flavoring contains the chemical diacetyl, which has been linked to lung damage in factory workers testing hundreds of bags of microwave popcorn per day and inhaling its fumes. The chemical is a naturally occurring compound that gives butter its flavor and is also found in cheese and even wine, according to the National Institute of Occupational Safety and Health.

It's been approved by the Food and Drug Administration as a flavor ingredient, but hundreds of workers have sued flavoring makers in recent years for lung damage.

There are no warnings from federal regulators, nor is there medical advice on how consumers should treat news of the rare, life-threatening disease, bronchiolitis obliterans, also known as popcorn lung.

Watson, 53, told CBS he first noticed something was wrong about three or four years ago during church choir practice.

"My lung capacity just seemed to start diminishing and I couldn't sustain my notes like I used to be able to," he said.

That's when he sought out Dr. Cecile Rose, a lung specialist at the National Jewish Medical and Research Center in Denver.

"He had a lung condition that we know is related to something he was inhaling," Rose said. "And I took a very complete history, including a work history and an environmental history and found nothing. And it wasn't really until the end of his initial medical evaluation where I turned to him and asked him … was he exposed to or was he around a lot of popcorn? And his jaw dropped and he asked me how I would possibly know that about him."

Rose said that no definite link can yet be made between Watson's popcorn consumption and his lung disease.

But, she said, "I think it's very important that the industry is taking this very seriously. They've known about the fact that workers who are using diacetyl can be at risk for lung disease. And if we're right in this case that consumers who are heavy users may be at risk as well, I think that the industry needs to be responsive to that possibility."

On Wednesday, the nation's largest microwave popcorn maker, ConAgra, said it would stop using diacetyl within a year out of concern for its workers - not because of risks to consumers. ConAgra makes Act II and Orville Redenbacher brands.

The Flavor and Extract Manufacturers Association said that Rose's finding does not suggest a risk from eating microwave popcorn.

Watson, 53, said his breathing has improved since his doctor told him to quit eating his extra-buttery microwave popcorn and lose weight. He said he's dieting and lost some 35 pounds, regained lung capacity, and his prognosis is good.