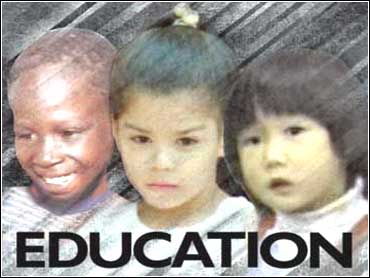 South Korea has the most effective education system in the world's richest countries, with Japan in second place and the United States and Germany near the bottom, a United Nations study said Tuesday.

The ranking "provides the first 'big picture' comparison of the relative effectiveness of education systems across the developed world," the UNICEF study said.

"It is based not on the conventional yardstick of how many students reach what level of education, but on testing what pupils actually know and what they are able to do," UNICEF said.

It said it based the study on five different tests of 14 and 15 year olds to determine their abilities in reading, math and science.

The scores of the tests were disclosed individually in 2001 and earlier. What is new about the study is that it averages the results to give "the most comprehensive picture to date of how well each nation's education system is functioning as a whole," UNICEF said.

Dewayne Matthews, vice president of the Denver-based Education Commission of the States, said the U.S. showing in the UNICEF ratings was expected by people who follow international rankings in education and emphasized the need for reform.

"A lot of that has been driven by this perception that our schools are simply not good enough and they don't compare well with systems in other countries," Matthews told The Associated Press.

The blame or credit for the results does not go exclusively to a nation's schools, said the 36-page study, part of a series of "report cards" produced by UNICEF's Innocenti Research Center in Florence, Italy.

"It is clear that educational disadvantage is born not at school but in the home," said the report. "Learning begins at birth" and is fostered by "a loving, secure, stimulating environment."

UNICEF spokesman Patrick McCormick said the study had been unable to draw conclusions on a range of factors, such as how much was spent on education. Some countries spent less and did better.

The study also didn't get into whether extreme competition was a factor in Japanese or Korean results.

"We didn't really get into why. We found out that there was no one answer," McCormick said. "We tried linkages with the teacher-student ratios, with various things, and it didn't work.

"The biggest thing is obviously the socio-economic background of the child and how well-educated their parents are."

The study said that "South Korea and Japan sit firmly at the
head of the class."

"Germany, with its strong educational and intellectual tradition, occupies 19th place out of the 24 nations," just behind the United States in 18th place.

Germany is unusual in that it sorts children at an early age into professional, white-collar and blue-collar curricula, the study said. The German labor market's demands for particular qualifications "meant that the track a child ends up in has a particularly strong impact on later life," it said.

Germany and Denmark finished in the bottom half of tests on reading and math, but scored high in a separate evaluation of adult literacy, "again illustrating the danger of treating any one survey with undue reverence," the study said.

The United States, however, finished low in each test and in adult literacy.

McCormick said the study had not attempted to explain why the United States had fared badly.

"That's for them to pick up and run with," said McCormick. "It's that sort of country. The countries that economically are very diverse, with big immigrant populations, with lots of moving around, with a huge poverty gap, probably are going to show these sorts of results with education itself."

UNICEF said it based its conclusions on combining results of tests conducted by the Program for International Student Assessment, or PISA, conducted in 2000 and the Trends in International Math and Science Study, or TIMSS, given in 1995 and 1999. TIMSS is backed in the United States by the Department of Education and the National Science Foundation and globally by the International Association for the Evaluation of Educational Achievement.

UNICEF said it also factored in results of the International Adult Literacy Survey of 1994 and 1998.

UNICEF said combining the tests produced "a more reliable overview" that helps meet criticism of any given test that may have been questioned for its cultural neutrality.