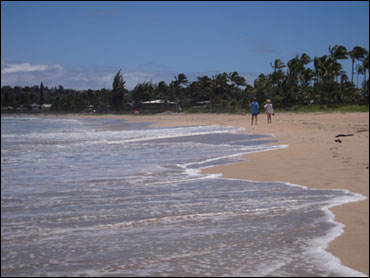 A new report by the federal commission investigating the Sept. 11 attacks found that rescuers were forced to make rapid-fire, life-and-death decisions based on incomplete communications, contributing to the World Trade Center death toll.

The report was issued Tuesday at the start of a hearing into the emergency response to the terrorist attacks, setting the stage for two days of dramatic testimony at the New School University, about 1½ miles from ground zero.

The hearing began with a stark warning from the commission's staff: "The details we will be presenting may be painful for you to see and hear."

Within 20 minutes, family members of the trade center victims were dabbing their eyes and offering each other support. More than 2,700 people were killed in the attack.

Committee member Sam Casperson, in a minute-by-minute recounting of the second plane's crash into the World Trade Center, detailed how Port Authority workers were advised to wait for assistance on the 64th floor — and many of them died when the tower collapsed.

Communications breakdowns also prevented announcements to evacuate from reaching civilians in the building, Casperson said. One survivor of the attacks recounted calling 911 from the 44th floor of the south tower, only to be placed on hold twice.

Emergency 911 operators had a "lack of awareness" about what was happening at the twin towers, and were overwhelmed by the sheer volume of calls, Casperson said.

There were scores of family members in the audience as the commission showed footage of the first hijacked plane slamming into the tower, and played videotaped testimony from survivors. Videotape of the second plane's impact was shown as well.

Survivor Stanley Pranmath recounted sitting in his 81st-floor office as the second plane veered toward his building, so close that he could clearly make out the letter "U" on the tail of the United Airlines plane.

"I dropped the phone, screamed and jumped under my desk," he said, adding that rubble from the crash landed within 20 feet of his impromptu hiding place.

Revisiting the jarring sights and sounds of the attack and its aftermath was a vivid departure from previous commission hearings. Some of the videotapes showed the confusing, rushed recovery efforts.

One critical issue — early public address announcements in Tower 2 telling workers to remain at their offices — was recounted verbatim by a survivor.