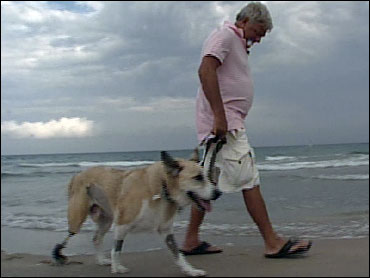 Prosthetic limbs have long been used to help humans who have lost a limb live a normal life. Now man's best friend is getting a leg up from prosthetics.

Prosthetics on animals is not actually new, reports veterinarian Dr. Debbye Turner Bell. But there's an exciting new technique that's given a three-legged dog a fourth leg and a new life.

At first glance, Cassidy looks like an ordinary dog on a walk.

Until you take a closer look. Then you see his brand new high-tech artificial leg.

"We decided to do the implant June of '07," said Steven Posovsky.

When Steven and Susan Posovsky adopted Cassidy from a New York City shelter in 2005, he was already missing his hind leg.

"Getting him a leg was not even in my thought at the time. It was just to save the dog," Steven Posovsky said.

But missing a leg was taking a toll on the German shepherd mix.

"You could see his posture; it was really hard for him," said Susan Posovsky.

"We worked for about a year first to try to design an external brace that was fairly sophisticated, but did not work very well," said Marcellin-Little.

"There were two removable legs were made for him. Slip-on legs, which he was able to just kick off," Steven Posovsky said. "At that point, they took out some computer diagrams and said let's look into this possibility of an osteo-integrated leg."

Cassidy's artificial leg is a permanent prosthetic, literally a part of his body. A titanium rod was implanted into Cassidy's tibia or lower leg bone. Over several months, Cassidy's own bone fused to the titanium rod. Then a custom designed carbon fiber foot with a rubber tread for traction screws right on to the implant.

"Now he walks for two, three hours and not a hint of fatigue," Steven Posovsky said. "Watching him run on the beach is a very emotional thing for me personally. But a lot of tears of joy."

Cassidy's new leg was a collaboration between Marcellin-Little and the Engineering department at N.C. State. It took 14 months of planning, trial and error before they finally fit a leg that would fit Cassidy permanently.