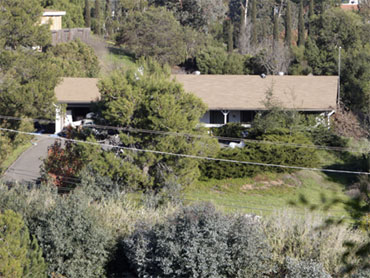 Investigators trying to determine what happened to Natalee Holloway focused Wednesday on a pond near where the U.S. teen was last seen nearly two months ago.

Authorities used a large pump to drain the pond across from the Marriott Hotel while investigators awaited the results of DNA analysis from labs in the Netherlands and the United States.

The authorities declined to specify what they were looking for in the pond, but confirmed it was part of the investigation into Holloway's disappearance on May 30, the final night of a high school graduation trip to the Dutch Caribbean island. The job was expected to be finished later Wednesday.

A lawyer for Holloway's mother and stepfather said the search was prompted by a witness who came forward last week and reported seeing three young men, including a Dutch youth who has been detained in the case, near the pond on the night of the teenager's disappearance.

"They consider the witness to be very credible," said the family's attorney, who said she receives regular updates on the case from investigators.

Holloway's stepfather, George Twitty, who was at a nearby hotel waiting for results of the search, said police asked the family not to watch as they worked behind a fence to clear the water.

"It's the first time the fire department, the police and other authorities have collaborated on such a huge search," the stepfather said Wednesday. "So they must know something. ... There's so much commotion, they must have a lead."

"I'm very encouraged about moving forward, and hopefully finding some answers that we've been waiting for, for a long time, and everyone has been," she said on ABC's "Good Morning America."

No one has been charged in the case and van der Sloot is the only person detained as a suspect. The Surinamese brothers, Satish and Deepak Kalpoe, were previously held and released.

The Kalpoe brothers first told police that they and van der Sloot dropped Holloway at her hotel around 2 a.m. the morning of May 30. Later, they said they had lied to protect their friend and that they had dropped the Dutch youth and Holloway at a beach near the hotel.

The new witness, a gardener who spoke to investigators Friday, said he saw van der Sloot try to hide his face with his hands as the three young men drove into a tennis club the night Holloway disappeared, said George Twitty, the missing teenager's stepfather.

The pond, which about 150 meters across, is between the Marriott and the tennis club.

It was unknown why the witness waited so long to speak to authorities. "He had his reasons," de Sousa said.

An attorney for van der Sloot, Richie Kock, said authorities had not told him about the new witnesses. Lawyers for the Kalpoe brothers were not immediately available for comment.

Aruban authorities said this week that they have dispatched a prosecutor to consult with the U.S. Federal Bureau of Investigation and brought in experts from the Netherlands as they investigate the disappearance.

Aruban investigators sent hair found attached to duct tape discovered along the shore of the island to the FBI crime lab in Quantico, Va., and to the Netherlands for DNA analysis.

The family on Monday increased the reward for information leading to the young woman's safe return to $1 million, from $200,000.

Holloway, 18, from Mountain Brook, Ala., vanished after an evening of eating, drinking and dancing at a nightclub which she left with the three young men, hours before she was to catch a flight home at the end of a graduation trip with 124 classmates.