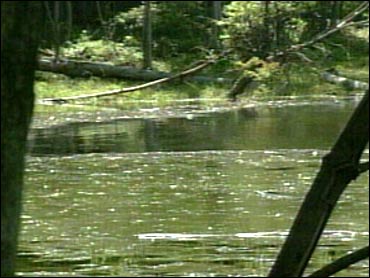 It may take up to a month to drain a pond where the FBI is seeking evidence in the deadly anthrax-by-mail attacks of 2001.

"It's going to be a long process," Special Agent Barry Maddox of the FBI's Baltimore field office said. "And we anticipate the investigation continuing. There are a number of outstanding leads that we are following."

The FBI on Monday began draining the pond in the Frederick Municipal Forest, where authorities believe the suspect may have filled the envelopes It could take about four weeks to drain the one-acre, 4- to 5-foot deep pond, which is part of the city's water supply.

CBS News Correspondent Jim Stewart reports the theory behind the pond probe is that the person responsible for the anthrax attacks assembled the letters underwater to avoid exposing himself to the dangerous spores.

The work drew FBI agents, other law enforcement officials and contractors, who operated dump trucks and backhoes at the site several miles northwest of the city. A generator and pumps were brought in, and two hoses ran into the pond.

"I'm in awe of the expense of this ... what they're trying to find here," nearby resident Larry Hood told the Frederick News-Post. "I mean, last time there was an army here."

The pumps made a constant hum and the occasional sound of beeps from heavy equipment backing up could also be heard near the pond, which is surrounded by ferns and brush. Yellow crime scene and orange plastic webbing marked off part of the area around the pond.

The water will be drained slowly and diverted into the nearby environment, said Richard McIntire, a Maryland Department of the Environment spokesman on the scene. The pond is fed by a natural spring, he said.

Even after the pond is drained, "it's probably going to stay pretty wet," McIntire said.

A roadblock kept nonresidents out of the area, which contains hiking trails. From the air, about a dozen workers could be seen on the muddy ground at the edge of the pond. Dark cars and law enforcement vehicles were parked in the forest.

The FBI said in a statement its agents and postal agents were conducting "searches related to the investigation of the origin of the anthrax-laced letters."

The attacks killed five people and sickened 17 others who were infected by anthrax bacteria sent through the mail.

The pond is eight miles from the Army Medical Research Institute of Infectious Diseases at Fort Detrick in Frederick, the primary custodian of the strain of anthrax found in envelopes sent to the victims.

Dr. Steven Hatfill, a bioterrorism expert who formerly worked as a researcher at the institute, has been described as a "person of interest" in the investigation. His apartment was next to Fort Detrick.

Hatfill has denied any involvement in the attacks.

The pond is one of 10 searched by divers in December and January after the FBI reportedly received a tip that someone may have used the spring-fed reservoir to assemble anthrax-filled envelopes using equipment submerged in water.

The Washington Post first reported May 11 that items recovered from the pond included a clear box with holes that could accommodate gloves to protect a user. Also recovered were vials wrapped in plastic.

Several FBI and Justice Department officials told The Associated Press, speaking on condition on anonymity, that investigators have a theory that someone could have used these items to safely place the anthrax in envelopes.

Testing of the items has not produced definitive evidence of anthrax contamination, these officials said. The pond is being drained to find out if anything else is there — especially at the bottom.

Hatfill's former home in Frederick has been searched at least three times. He has been under surveillance by FBI agents and other federal officers.

The city said the FBI had hired an engineering firm to drain the pond.

The man-made, spring-fed ponds are known locally as "the fire ponds." They were built decades ago in the 7,000-acre forest for use in fighting fires.