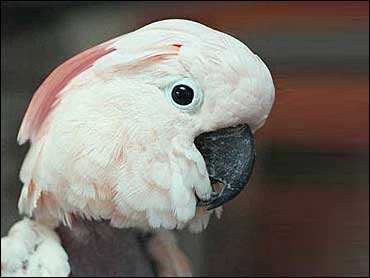 Prosecutors say a pet cockatoo that was killed while trying to protect its owner from an attacker produced evidence crucial in convicting the man's murderer.

Kevin Butler's 18-inch white-crested cockatoo, named Bird, flew at Daniel Torres during the Christmas Eve 2001 attack and pecked him on the head, drawing blood. Torres wiped the blood and then touched a light switch, leaving his DNA at the crime scene, authorities said.

His DNA was also found on the handles of two knives used to attack Butler, prosecutor George West told jurors.

According to testimony, Butler was stabbed in the chest and abdomen, his throat was slashed and he suffered a brutal beating.

Torres was convicted Tuesday of capital murder and sentenced to life in prison for Butler's slaying in Pleasant Grove.

"This bird spoke; he spoke to us," West told jurors. "We know this bird will attack anybody who is attacking his owner. And who did he attack? Daniel Torres."

Butler acquired the bird from a roommate who had to move, according to Kathy Butler, the victim's sister.

"All of his animals were strays," Butler told the Dallas Morning News. "He treated his pets with love, and in doing so, his pets loved him back, and that was certainly the case here."

Torres had said in a confession that he stabbed the bird with a fork because it pecked him "all over my head." However, on the witness stand Tuesday, he denied the account and blamed the crime on his half-brother, Johnny Serna, who is to stand trial later.

The Dallas Morning News reports Torres testified that he did not harm Butler. He admitted going to the victim's house but said he did so only to check on Serna after he threatened to harm Butler. The two men had a falling out after Serna worked for Butler's pool company.

Torres said that when he arrived at the house, Serna was in a drunken rage and the victim was on the floor, his arms and legs bound with electrical cord. Torres testified that he cut his hand wrestling a knife from Serna who was jabbing Butler with it. He said he took the victim's truck because he was scared and wanted to get away from the scene.

"I think that even without the bird — the crime scene, the photos and the way the victim was bound — it was a violent struggle," Linder said. "The state had a lot of evidence." Butler's body was found tied up.

Mr. Torres received an automatic life sentence because prosecutors did not seek the death penalty. He will be eligible for parole in 40 years.