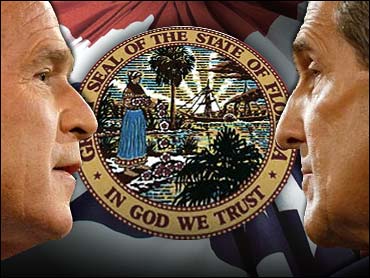 Some national polls give President Bush a slight — but very tight — lead over John Kerry as the presidential race enters its final two weeks and voters in the battleground state of Florida begin casting ballots.

A CNN/USA Today/Gallup poll of likely voters has Mr. Bush up 52-44 percent, a shift from Kerry's one-point lead in that survey last week. Among registered voters, Mr. Bush's lead is a mere 49-46 percent. The poll of 1,013 people had a 4-point margin of error.

A daily Washington Post daily tracking poll of about 350 likely voters has Mr. Bush up 50-46 percent, with a 3-point margin of effort.

A Reuters/Zogby poll of 1,211 likely voters has the men tied at 45 percent each, with a 2.9-point margin of error.

"I think we are going to see numbers moving up and down and we've seen the incredible volatility, although just within very narrow margins here," Amy Walter of the Cook Political Report told the CBS News Early Show.

A new CBS News/New York Times poll was due out later Monday.

The latest numbers could reflect the recent focus on Kerry's reference to Vice President Dick Cheney's lesbian daughter at the last debate, to which the Cheney family took exception, Walter said.

As that story absorbed campaign coverage, "the focus has not been so much on other issues, whether it's the economy or Iraq or the war," Walter said.

"I think what we're going to find out with all of these polls what this comes down to is where the spotlight ends up as we get closer to Election Day," Walter said.

Florida voters could start casting ballots for U.S. president on Monday, and Kerry was to spend all day asking for their support in this crucial state that decided the last election.

Campaigning in West Palm Beach, Kerry criticized the president's conduct in Iraq and urged voters to take advantage of laws that let residents cast their ballots for the Nov. 2 election beginning Monday.

Kerry said Mr. Bush was guilty of "arrogant boasting" about Iraq amid reports that the top U.S. commander complained to the Pentagon last winter that troops didn't have the supplies they needed.

"Despite the president's arrogant boasting that he's done everything right in Iraq and that he's made no mistakes, the truth is beginning to catch up with him," Kerry said.

"The president's tough talk about always supporting the troops is nothing more than empty rhetoric."

Mr. Bush was to give a speech about security in New Jersey — a state in the shadow of the Manhattan skyline that was scarred by Sept. 11 attacks — arguing that his battle plan for fighting terrorists is better than his rival's. Later Monday, the president has a fund-raiser in Florida.

Mr. Bush is hoping that his message about fighting terrorism will resonate with voters in New Jersey, where surveys show that national security and terrorism are top campaign issues. Nearly 700 New Jersey residents died when hijacked airplanes flew into the World Trade Center's twin towers.

"From a lot of places in New Jersey you could see the towers," Karl Rove, Mr. Bush's chief political adviser, told reporters at a weekend campaign rally in West Palm Beach, Florida. "A lot of people in New Jersey, a lot of communities in New Jersey felt personally the sting of 9/11. I think that has made them more sensitive — as we get close to the end — about the question of who will make America safer."

You can't see downtown Manhattan from Marlton, a city in southern New Jersey where Mr. Bush will speak, but it's within the Philadelphia media market and Pennsylvania, with its 21 electoral votes, is another closely contested state.

Kerry adviser Joe Lockhart says New Jersey is an interesting place for the president to campaign because its two senators and former Gov. Thomas Kean, chairman of the bipartisan Sept. 11 commission, have complained that Mr. Bush hasn't done enough to push the panel's recommendations into law.

Lockhart says widows of the attacks plan to express their concern Monday about Mr. Bush's strategy in winning the war on terror.

While asking for votes in Florida, Kerry planned to lay out his prescription for avoiding another flu vaccine shortage like the one this season.

Kerry wants manufacturers to report vaccine supplies to public health officials, encourage the donation and public buyback of surplus vaccines, establish a reserve of the inoculations and encourage more drug makers to produce the vaccine.

His campaign also rolled out a TV ad showing Mr. Bush saying, "I truly am not that concerned about him" — a reference to Osama bin Laden. The ad seeks to make the case that "It's time for a new direction" on Iraq and the war on terror.

On Sunday, both campaigns won the endorsements of newspapers around the country.

Early voting was introduced in Florida after the drawn-out recount in the 2000 election, in which Mr. Bush defeated Al Gore by a mere 537 votes across the state.

Florida, which gave Mr. Bush the victory in the controversial 2000 election by a razor-thin margin, remains a battleground this year. Whichever candidate gets more votes in Florida captures all 27 of its electoral votes. A total of 270 electoral votes is needed to win the presidency.

Democrats said they have 46,000 volunteers mobilized to help get out the early vote, delivering a blizzard of phone calls and mail.

With a little more than two weeks before the Nov. 2 election, early voting started Monday in Texas, Colorado, Arkansas as well as Florida. Other key states this year have already begun voting, including Wisconsin, Iowa, Nevada, Ohio, New Mexico, Pennsylvania and Michigan.