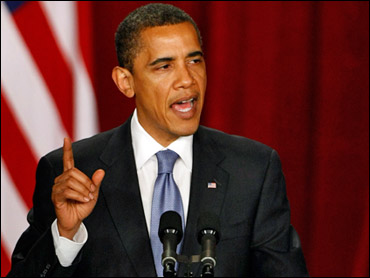 Muslims around the globe remain uneasy about the U.S. and are increasingly disenchanted with President Barack Obama, according to a poll that suggests his drive to improve relations with the Muslim world has had little impact.

Even so, the U.S. image is holding strong in many other countries and continues to be far better than it was during much of George W. Bush's presidency, according to the survey.

There is one glaring exception: Mexico, where 62 percent expressed favorable views of the U.S. just days before an Arizona law cracking down on illegal immigrants was signed in April, but only 44 percent did so afterward.

The findings by the Pew Global Attitudes Project, conducted in April and May in the United States and 21 other countries by the nonpartisan Pew Research Center, come amid a global economic downturn and U.S. wars in Afghanistan and Iraq. The poll has been measuring the views of people around the world since 2002.

Among the seven countries surveyed with substantial Muslim populations, the U.S. was seen favorably by just 17 percent in Egypt, Turkey and Pakistan and 21 percent in Jordan. The U.S.'s positive rating was 52 percent in Lebanon, 59 percent in Indonesia and 81 percent in Nigeria, where Muslims comprise about half the population.

None of those figures was an improvement from last year. There were slight dips in Jordan and in Indonesia, where Obama spent several years growing up. Egypt saw a 10-point drop, even though Obama gave a widely promoted June 2009 speech in Cairo aimed at reaching out to the Muslim world.

In all seven of those countries, the percentage of Muslims expressing confidence in Obama has also dropped since last year. Only in Nigeria and Indonesia do majorities of Muslims voice confidence in him; in Obama's worst showing, just 8 percent in Pakistan do.

The survey found that majorities of the public in Turkey, Jordan, Egypt, Indonesia, Lebanon and Pakistan say the U.S. could someday be a military threat to their country.

"You get a sense of Muslim disappointment with Barack Obama," said Andy Kohut, the Pew president, who attributed it to discontent with U.S. policy on the Israeli-Palestinian conflict and to expectations raised by Obama's Cairo speech.

The surveys were taken before Israel's deadly May 31 clash with a flotilla of boats trying to break the blockade of Hamas-controlled Gaza, which sparked widespread condemnation of Israel.

In the rest of the world, the U.S. and Obama generally fare better.

The 6 in 10 in Germany and Spain who view the U.S. favorably has doubled from the lows reached under Bush. The U.S. image is also significantly better than it was under Bush in Russia, China, France, Argentina, South Korea and Japan. Obama is broadly supported, but the percentages expressing confidence in him have ebbed in 14 countries polled.

In only five countries do majorities think the U.S. considers other nations when setting its foreign policy. Support for U.S. anti-terrorism efforts and Obama's handling of economic problems is generally strong, but there is significant opposition to American involvement in Afghanistan and little faith that a stable government will emerge in Iraq.

In the seven Muslim nations polled, the portion of Muslims saying suicide attacks are sometimes justified ranged from 39 percent in Lebanon to 5 percent in Turkey. Nowhere did Muslims give majority support to Osama bin Laden or his al Qaeda terrorist group.

In every nation but Poland, China and Brazil, most are unhappy with how things are going in their country, though dissatisfaction has grown in only three countries in the past year. Attitudes about each country's economic situation are similarly negative, though a bit brighter than a year ago.

Nine in 10 Chinese are happy with their country's economy, by far the highest mark of any nation polled. China is seen more positively than negatively in 15 countries, and in eight countries China is viewed as the world's leading economic power, up from two who said so last year.

Only in Pakistan does a majority favor Iran having nuclear weapons. In most countries, economic sanctions against Iran's nuclear program get higher support than military action. But significant numbers are prepared for a showdown: In 16 countries, more people who oppose Iran's nuclear program consider stopping Tehran from getting such weapons more important than avoiding a military conflict.

More people in every country except Egypt and Jordan said the environment should be a priority, even at the cost of economic growth and jobs. But only in nine countries are half or more willing to pay higher prices to address global warming.

Three-fourths of Brazilians say their team will win this year's World Cup soccer tournament, easily the most confident showing of the countries polled. Just 13 percent of Americans picked the U.S.

The Pew Global Attitudes Project was conducted by the Pew Research Center in 22 countries from April 7 through May 8, though the exact dates varied by country. Interviews were mostly conducted face-to-face, though telephone interviews were used in the U.S., Britain, France, Germany, Spain and Japan.

Sample sizes ranged from 700 people in Japan to 3,262 in China. National samples were used in all countries except China, India and Pakistan, where those interviewed were disproportionately urban. The margin of sampling error ranged from plus or minus 2.5 percentage points in China to 5 points in Germany.