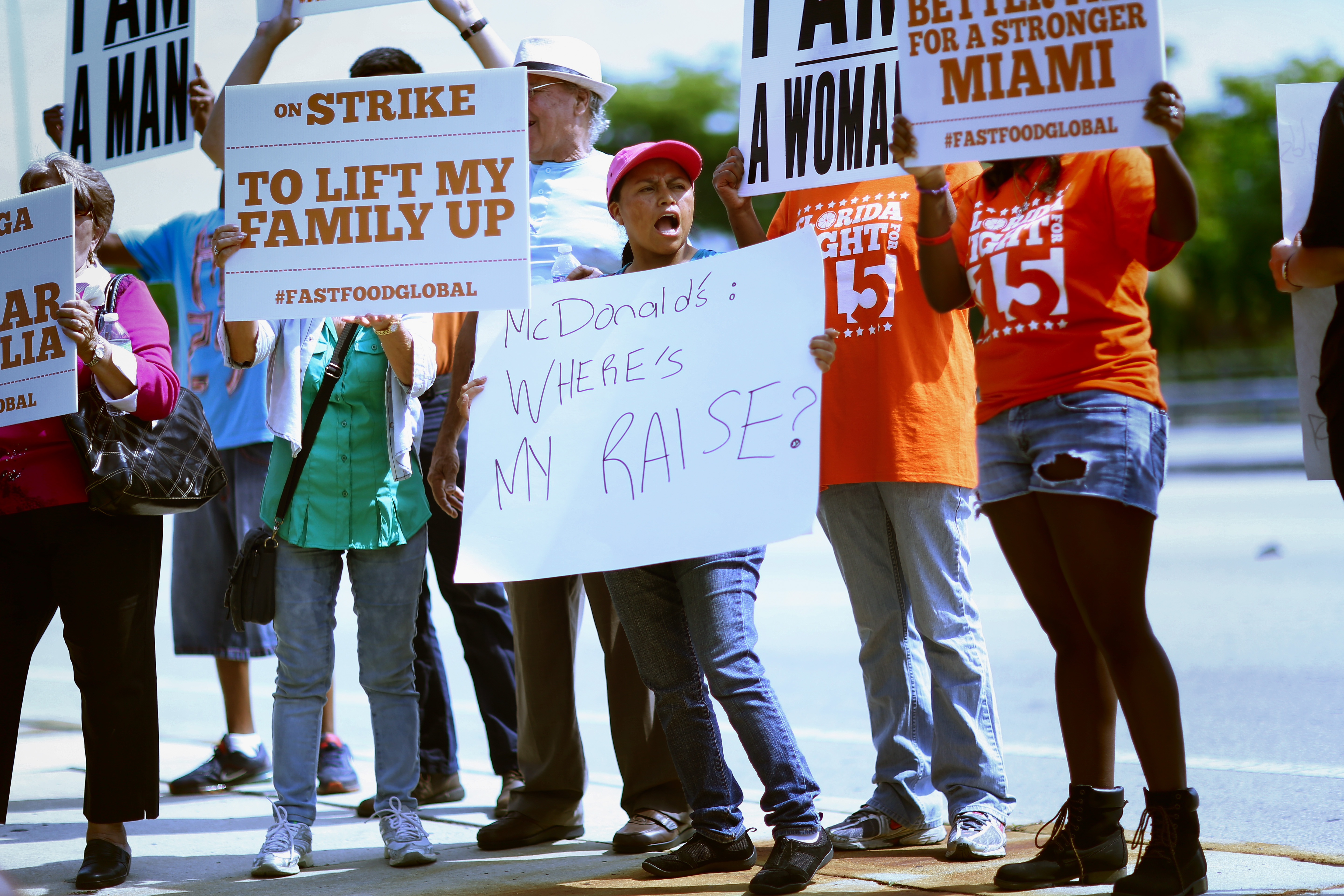 The public is divided on the availability of good jobs for American workers. Forty-six percent say America's best years are behind us, while 47 percent think the country's best years are to come.

The poll asked about a range of proposals that could impact the workplace. Eighty-five percent favor requiring employers to offer paid sick leave to their workers (something the U.S. doesn't currently require). In addition, there is strong support for paid parental leave (80 percent) and raising the federal minimum wage to $10.10 an hour (71 percent). Seven in ten Americans also favor requiring chain stores and fast-food outlets to give workers at least two weeks' notice of any changes in an employee's work schedule.

There is less support for limiting the salaries of top executives at large corporations: 50 percent favor that, while 45 percent oppose it. Most Americans oppose requiring fast food chains to pay their employees at least $15 an hour.

Next month marks 80 years since the National Labor Relations Act was signed into law; an act that granted employees the right to organize unions. Among those who live in a household where someone is a union member (15 percent in this poll), opinions are mixed on the influence labor unions have today: slightly more say they have too little influence (35 percent) rather than too much (30 percent).

Fifty-four percent of Americans think workers who don't want to join a union should be able to opt out of paying union fees, even if they are getting the benefits of a union bargaining on their behalf. Forty percent think these employees should be required to pay union fees in exchange for the benefits they receive. More than half of those living in a union household say these workers should be required to pay fees to the union.

Who can get ahead in the U.S.?

Beyond the workplace, the poll suggests concerns about opportunities for success and the distribution of wealth, with many thinking both are slanted toward those at the top of the income ladder. 61 percent think it's only a few people at the top who can get ahead; just over a third thinks anyone has a fair shot.

Sixty-seven percent of Americans think the gap between the rich and poor in the U.S. is getting larger, and most think something needs to be done about it.

Sixty-five percent say the growing gap between the rich and the poor is something that needs to be addressed now. Republicans are less likely than Democrats or independents to see this as an urgent matter.

There is also a partisan divide on whether reducing the gap between the rich and the poor is a job for government. Most Democrats and independents think that it is, while most Republicans do not.

When asked about some tax proposals, Americans favor raising taxes on those earning $1 million dollars or more, but they oppose a tax increase on transactions involving the sales of stocks and bonds.

Among working Americans, most feel secure that they can continue in their job as long as they like. While a majority of those with household incomes below $50,000 feel at least somewhat secure in their job, they feel less secure than those earning more.

The global economy and trade

More than half of Americans oppose giving the President the authority to negotiate trade agreements that Congress can approve or disapprove but not change - sometimes called fast track authority. Views on this divide along partisan lines, with independents siding with Republicans.

Majorities of Americans have supported trade restrictions since 1989, when CBS News and the New York Times began asking this question.

Support for restrictions on trade cuts across party lines, although Republicans are somewhat less likely to think restrictions are necessary.

Few Americans are paying attention to news about negotiations surrounding the Trans-Pacific Partnership (TPP), a trade agreement involving the U.S. and Pacific Rim countries: only 22 percent have heard or read a lot or some about it.

When asked about NAFTA - the North American Free trade agreement that was negotiated in the 1990s - more than six in 10 Americans don't know enough about it to have an opinion. Among those with an opinion, more favor it (22 percent) than oppose it (14 percent).

This poll was conducted by telephone May 28-31, 2015 among a random sample of 1,022 adults nationwide. Data collection was conducted on behalf of CBS News and The New York Times by SSRS of Media, PA. Phone numbers were dialed from samples of both standard land-line and cell phones. The error due to sampling for results based on the entire sample could be plus or minus three percentage points. The error for subgroups may be higher. Interviews were conducted in English and Spanish. This poll release conforms to the Standards of Disclosure of the National Council on Public Polls.