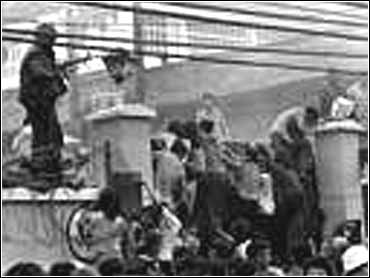 Twenty-five years after the fall of Saigon, most Americans still feel that their country's involvement in the Vietnam War was a bad idea, according to a CBS News/New York Times Poll.

But at the same time, Americans are divided in their moral judgments; the percentage who consider it a noble cause is equal to that deeming it wrong and immoral.

Six in 10 Americans think that the United States should have stayed out of the conflict in Vietnam.

The majority of Republicans and Democrats as well as of the demographic groups measured agree on this point, but feelings are especially pronounced among Americans of draft age during the war—those now 45 to 64: Sixty-seven percent of 45- to 64-year-olds think the United States should have stayed out of the fighting.

Americans remain divided over the morality of U.S. involvement. Thirty-seven percent of adults polled said that Vietnam was a noble cause—a rise from the 33 percent tallied five years ago.

This historical evaluation illustrates some partisan divisions: Forty-five percent of Republicans sampled think that Vietnam was a noble cause, compared to 35 percent of the Democrats.


The specter of Vietnam also haunts America in other ways: Americans believe that the United States still has soldiers alive—but missing—in Vietnam. In addition, Americans think that Vietnam still affects foreign policy decisions today.
More than three-quarters of the adults polled think that the American experience in Vietnam affects U.S. foreign policy even today, including 30 percent who say it has a lot of impact. Only 13 percent think it has little or no impact.

And according to the poll, the top lesson learned from the Vietnam conflict is that the United States should not get involved in other countries' affairs.

Nineteen percent of those polled cited this as the top lesson, while another 12 percent said the United States should not get involved in conflicts if not prepared to do what it takes to win. Ten percent indicated that the Vietnam experience taught the United States to be more cautious.

Seventy-three percent of the American adults polled claim to know either some or a lot about the Vietnam War, while only 25 percent say they know little or nothing about it.

Recollections of the war are clearer, however, among those who came of age during it: When asked on which side the United States fought, 57 percent of the adults polled correctly chose South Vietnam.

Americans are murky on the Vietnam-era history of the two presidential contenders: Vice President Al Gore served in Vietnam; Texas Gov. George W. Bush did not. Only 15 percent indicated Gore had served, while 8 percent erroneously said Bush served; 58 percent cited their lack of knowledge on this topic.

This poll was conducted among a nationwide random sample of 1,150 adults interviewed by telephone, April 15-17. The error due to sampling could be plus or minus three percentage points for results based on the total sample.