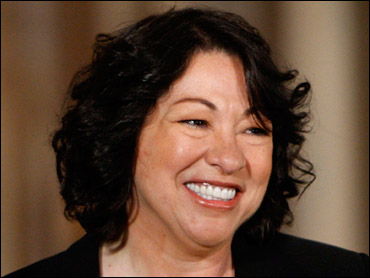 President Obama's first nominee to the Supreme Court, Sonia Sotomayor, receives a net positive rating from the American public, but like many past nominees at this point in time, she remains largely unknown to most, according to a new CBS News/New York Times poll.

Half cannot say whether or not the Senate should confirm Sotomayor, though nearly four times as many favor her confirmation than oppose it. Confirmation hearings for Sotomayor are expected to begin next month.

At this point, 34 percent say the Senate should vote to confirm Sotomayor, compared with 9 percent who say it should vote against her. The poll, conducted June 12 - 16, found more than half of Americans cannot say one way or the other.

Sotomayor's favorability ratings are similar. Among those Americans who say they have an opinion of the judge, 33 percent view her favorably while just 9 percent have an unfavorable view. Yet 58 percent of Americans remain either undecided about their opinion or say they haven't heard enough about Sotomayor.

Opinions of Sotomayor are more positive than some recent Supreme Court nominees shortly after their nominations, and she is also better known. The public is more familiar with Sotomayor and holds more favorable views of her compared with Justice David Souter, the justice whom Sotomayor will replace on the Supreme Court if she is confirmed. Souter was nominated in 1990. He had only a 13 percent approval rating at this stage of his nomination, while 81 percent said they had not heard enough about him or did not have an opinion.

As has been the case with many past nominees, views of Sotomayor are highly partisan. More Republicans (24 percent) view Sotomayor unfavorably than favorably (13 percent), while 56 percent of Democrats have a favorable opinion of her.

If confirmed, Sotomayor would be the third woman (and the first Hispanic) to sit on the Supreme Court. While American women view her more favorably than not, 61 percent are unable to offer an opinion of her -- higher than the percentage of men (55 percent) who do not hold an opinion.

Six in 10 Americans say they are closely following the news of Sotomayor's appointment to the Supreme Court, but only one in five are following it very closely. Democrats are a bit more likely than Republicans to be following this news very closely.

(CBS)
Sotomayor has been criticized by some who think she may allow her experiences as a Hispanic woman to unfairly influence her judicial decisions. Critics point to her 2001 statement that she hoped a "wise Latina woman with the richness of her experiences would more often than not reach a better conclusion than a white male who hasn't lived that life."

When it comes to critical issues, however, most say it is important for the Senate to know Sotomayor's positions on issues such as abortion and affirmative action before confirming her. Both Democrats and Republicans say the Senate should know where Sotomayor stands on these issues, but more Republicans think it is very important.

This view is not new. When both Samuel Alito and John Roberts were nominated to the court, similar majorities said it was important for the Senate to know their positions on these issues.

More generally, 62 percent of Americans think the Senate should consider any Supreme Court nominee's positions on issues (not specifically Sotomayor's) in addition to his or her legal background.

Most Americans want diversity on the high court. Three in four say it is at least somewhat important that members of the Supreme Court reflect the diverse gender, ethnic and racial make-up of the country as a whole. However, 58 percent of Democrats say this is very important, compared to just 26 percent of Republicans. Women and men are equally as likely to say diversity is important.

This poll was conducted among a random sample of 895 adults nationwide, interviewed by telephone June 12-16, 2009. Phone numbers were dialed from RDD samples of both standard land-lines and cell phones. The error due to sampling for results based on the entire sample could be plus or minus three percentage points. The error for subgroups is higher. This poll release conforms to the Standards of Disclosure of the National Council on Public Poll.