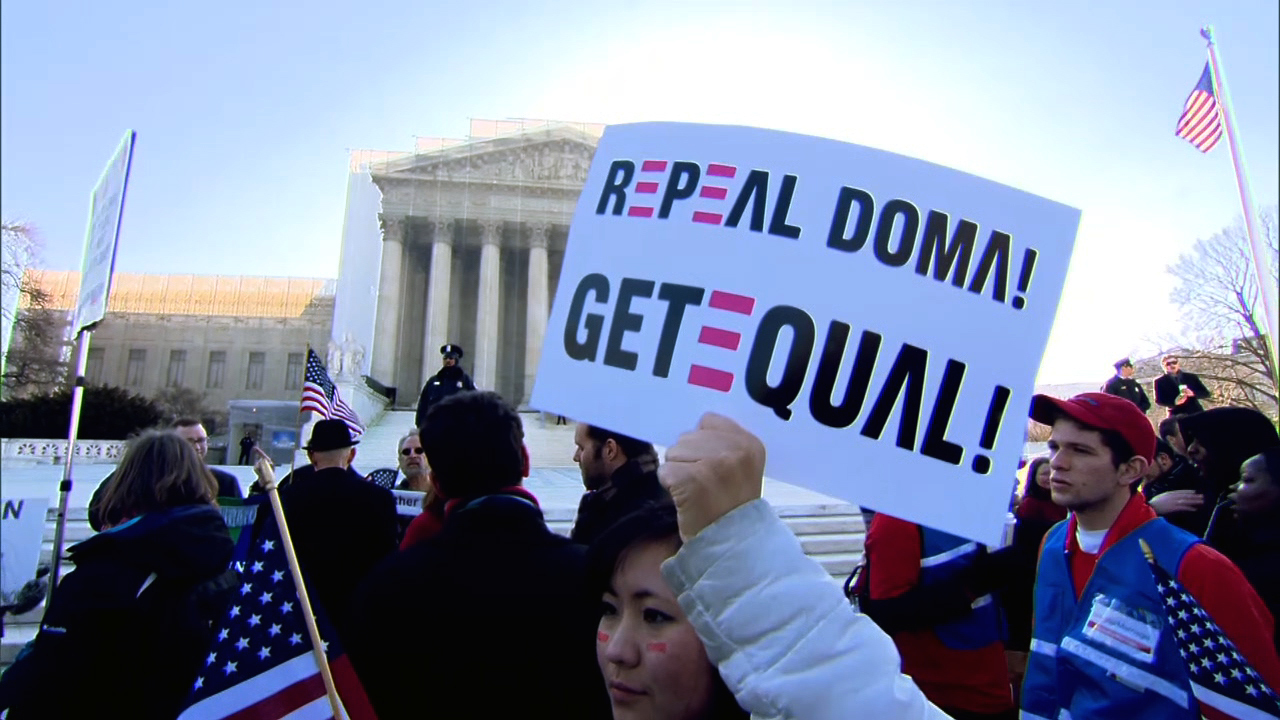 Ahead of two significant Supreme Court decisions on the subject of same-sex marriage, a new CBS News/ New York Times poll shows a slim majority of Americans now say it should be legal for same-sex couples to marry.

Fifty-one percent of Americans nationwide say they support the cause, according to the poll, conducted May 31-June 4, while 44 percent do not.

There continue to be striking partisan and age differences: 61 percent of Democrats and 56 percent of independents think same-sex couples should be permitted to marry, but just 33 percent of Republicans agree. Young Americans, those ages 18 to 29, are especially likely to support same-sex marriage (68 percent), while those who are older are less likely to.

These views have been fairly consistent for the last few months, but they are a reversal of what they were a year ago. In May 2012, just after President Obama announced his support for same-sex marriage, a slight majority of Americans said it should not be legal for same-sex couples to marry.

Since then, the Supreme Court has heard arguments in two major cases broaching the issue of same-sex marriage: Hollingsworth v. Perry reviews the constitutionality of California's same-sex marriage ban, Proposition 8. That case gives the court the opportunity to define marriage as a constitutionally-protected right for both straight and gay couples. United States v. Windsor challenges the constitutionality of the Defense of Marriage Act (DOMA), a federal law defining marriage as between a man and a woman. The court is expected to hand down rulings in both cases by the end of the month.

In addition, 56 percent of Americans think the federal government should legally recognize existing same-sex marriages and provide them the same federal benefits the government provides to heterosexual married couples. This is the question the Supreme Court is considering in the Windsor case.

While the Supreme Court is sure to impact the debate over same-sex marriage, state lawmakers continue to take up the issue as well. When asked who should decide this issue, 60 percent of Americans think it should be left up to each individual state government. A third say it should be determined by the federal government, up from 26 percent in March and similar to where it was last year.

Along with same-sex marriage, the Supreme Court this month will hand down rulings on the issues of affirmative action and civil rights: In Fisher v. University of Texas at Austin, the court to rule on whether the university's consideration of race in admissions is constitutional. Shelby County v. Holder considers the constitutionality of Section 5 in the Voting Rights Act.

When Americans are asked the reason they support these programs, by a wide margin more say diversity than making up for past discrimination. When given the choice between the two, 63 percent say they favor affirmative action programs in order to increase diversity, while just 24 percent say they support such programs to make up for past discrimination.

The Voting Rights Act was passed in the 1960's to prevent state and local governments from using procedures to block black Americans from voting. Today, there is division among the American public on whether that law is necessary to make sure that blacks are allowed to vote: 49 percent say the law is necessary, but 44 percent say it is not. Here too, race is a factor. Black Americans are significantly more likely than whites to say the Voting Rights Act is still necessary.

When asked generally about what role the justices' own views play in their decisions, 68 percent think the current Supreme Court justices sometimes let their own personal or political views influence their decisions, while just 20 percent believe they decide cases based only on legal analysis. Republicans, Democrats and independents agree.

Forty-four percent of Americans approve of the job the Supreme Court is doing, while 40 percent disapprove. These ratings are similar to what they were in March.

Do You Favor or Oppose Affirmative Action Programs for Minorities?

This poll was conducted by telephone from May 31-June 4, 2013 among 1,022 adults nationwide. Data collection was conducted on behalf of CBS News/The New York Times by Social Science Research Solutions of Media, PA. Phone numbers were dialed from samples of both standard land-line and cell phones. The error due to sampling for results based on the entire sample could be plus or minus three percentage points. The error for subgroups may be higher. Interviews were conducted in English and Spanish. This poll release conforms to the Standards of Disclosure of the National Council on Public Polls. See next page for full poll results.
View CBS News In
CBS News App Open
Chrome Safari Continue
Be the first to know
Get browser notifications for breaking news, live events, and exclusive reporting.