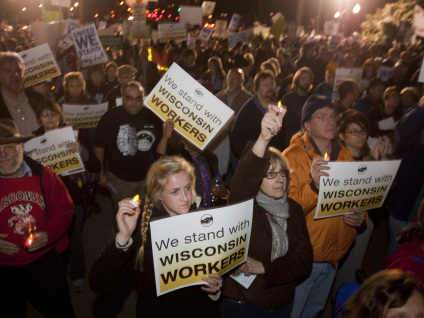 As debate rages in Wisconsin and other states over limiting the power of unions, a new CBS News/New York Times survey finds that many Americans are siding with organized labor.

"The poll shows public opposition to broad measures that would reduce the compensation of public employees or curtail their ability to negotiate through collective bargaining, even when placed in the context of helping to reduce state deficits and balance state budgets," said CBS News Director of Surveys Sarah Dutton.

Americans are split on the motivations of those seeking to reduce public employee benefits. Forty-five percent - including 59 percent of Republicans - say that those trying to reduce the benefits are mostly motivated by reducing budget deficits. But 41 percent - including nearly half of Democrats and independents and a majority of union households - said the goal was actually primarily to weaken the power of unions.

Views of Unions and Public Employees

The poll suggests that Americans have a net positive view of labor unions. Thirty-three percent have a favorable view, compared to 25 percent who hold an unfavorable view. Thirty-nine percent are undecided or haven't heard enough.

And the percentage of Americans who say labor unions have too much power has declined. In 1981 - not long after the air traffic controller controversy - 60 percent of Americans said unions had too much power. By 2009, that figure had fallen 13 points, to 47 percent.

In the new CBS News/New York Times survey, it is down another 10 points, to 37 percent. (While 61 percent of Republicans say unions have too much power, just 22 percent of Democrats agree.) Twenty-nine percent in the new survey said unions have the right amount of power, and 19 percent said they have too little power.

Before the survey was released, CBS News asked New Jersey Republican governor Chris Christie to comment on its finding of support for public employee unions.

Christie, who has been critical of teachers' unions in his state, said the collective bargaining story was "entertaining," though he said it wasn't an issue in his state or most states. He then told a CBS News reporter that he was "sure you worded the poll in a way that kept [the story] going."

"I'm the governor, I think I've got a better idea on public opinion in my state than CBS News does to tell you the truth," he said. "If not, Katie Couric should run for governor of New Jersey." (watch at left)

Speaking Sunday on CBS' Face the Nation Christie said he supported "fair and reasonable" collective bargaining rights for public service employees in New Jersey, but rights "didn't come down from tablets at the top of a mountain."

This poll was conducted among a random sample of 984 adults nationwide, interviewed by telephone February 24-27, 2011. Phone numbers were dialed from RDD samples of both standard land-lines and cell phones. The error due to sampling for results based on the entire sample could be plus or minus three percentage points. The error for subgroups is higher.