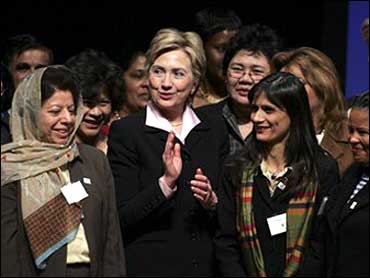 A growing number of registered voters believe Sen. Hillary Rodham Clinton should run for president in 2008, according to a poll released Tuesday.

Marist College's Institute for Public Opinion poll found that 46 percent of voters want the former first lady to run for the White House while 49 percent said she should not. In a December poll, 38 percent favored a run, while 50 percent were opposed.

Clinton was the choice of 39 percent of Democrats for their party's nomination for president in 2008, while Massachusetts Sen. John Kerry, who lost to President Bush last year, was preferred by 21 percent.

On Sunday, in an interview with Japan's TV Asahi, Former President Bill Clinton said he did not know whether his wife has any plans to one day run for the White House.

"I don't know if she'll run or not," he told the network, but added, "She would make an excellent president, and I would always try to help her."

Also Sunday, a powerful Democratic senator said Sen. Clinton would be the toughest candidate to beat if she decided to run for president.

"I think she'd be incredibly difficult to beat," said Sen. Joe Biden, D-Del., on NBC's "Meet the Press." "I think she is the most difficult obstacle for anyone being the nominee."

Neither Clinton nor Giuliani has indicated they will run in 2008.

Marist's telephone poll of 851 registered voters was conducted Feb. 14-16 and had a sampling error margin of plus or minus 3.5 percentage points.

The Siena College Research Institute poll had Spitzer leading Pataki 53 percent to 30 percent, up from a 51-to-35 percent Spitzer lead in a Siena poll last month.

Spitzer has said he will run for governor in 2006; Pataki has not said if he will seek a fourth term.

Siena's telephone poll of 600 registered voters was conducted Feb. 28 through March 4 and had a sampling error margin of plus or minus 4 percentage points.