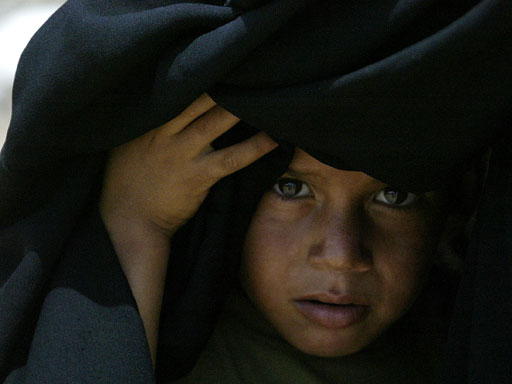 Americans are rallying around the flag and want revenge, according to a CBS News–New York Times poll released Monday. They also believe the U.S. should return to business as usual as soon as possible.

Nearly all are willing to endure long lines and security checks to prevent terrorist acts, and there is a growing sense that the U.S. will have to go to war.

Eighty-five percent of Americans say the U.S. should take military action against whoever is responsible for Tuesday's attacks. Only six percent oppose military retaliation.

As is the case in nearly all opinion polls about issues of war and peace, men are much more likely than women to support these military actions, though in this case majorities of women do favor all the options. Fifty percent of women would support military retaliation even if many thousands of innocent civilians would die.
More Americans fully expect that the U.S. will go to war now than did earlier this week: Sixty-eight percent.
The public's desire for action, in part fueled by anger and the need for retribution, includes a willingness to make at least one change in the law: The current statute forbidding the government to seek out and assassinate people in foreign countries who commit terrorist acts in the United States and elsewhere. Sixty-five percent think this law should be changed so the U.S. government can assassinate people in foreign countries who commit terrorist acts, and twenty-three percent disagree.

Getting Back To Business

But Americans don't just want to retaliate. Agreeing with many government leaders, most Americans think it's important to return to business as usual as soon as possible.

Nearly six in ten Americans say the United States should do so. Fewer than a third say the country needs more time after Tuesday's tragedy before that should happen.

Should U.S. Return To Business As Usual As Soon As Possible?
Yes 59%
No, need more time 31%

For more than a third the time to return to business as usual is right now. Thirty-seven percent of Americans say the U.S. is now ready to do this; 47 percent think it is too soon.

Among the 47 percent who think it is too soon for the U.S. to return to business as usual, three-quarters of them say we will be able to do so in the very near future — in the next few dayor weeks. Overall, half the public say the country is ready to return to business as usual immediately or in the next few days. That figure rises to seventy-one percent when those who expect it will take a few weeks are added to the total.

Men are more likely than women to say the U.S. is ready to get back to business. Forty-two percent of men say this, compared with 33 percent of women. Americans across all regions of the country share the view that the U.S. should get back to business as usual as soon as possible after Tuesday's great tragedy, and believe that the country is ready or will be able to do so soon.

Americans believe they will have to give up some of their personal freedoms in order to make the country safe from terrorist attacks, and most are willing to stand in line and face security checkpoints, though most are not willing to have their phone conversations and emails monitored.

Seventy-four percent say Americans will have to give up some personal freedoms to make the country safe against terrorism. But an even greater number are willing to face security checkpoints and long delays to fly.

Will Americans Have To Give Up Personal Security To Protect U.S. From Terrorism?
Yes 74%
No 21%

More than eight in ten say they would favor more security checkpoints and metal detectors at public buildings and events, even if they'd have to wait an hour or more each time they went. Eighty-five percent of those who fly say they would be willing to arrive three hours before a domestic flight.

There are limits though. Most say they would not be willing to have the U.S. government monitor phone calls and emails on a regular basis. Women and those 65 and older were the most willing to trade privacy for safety.

In the last four days, there has been little change in public concerns about terrorism in their own communities. About four in 10 Americans have said they were very concerned each interviewing day since Tuesday's events. There are differences among parts of the country and differences between men and women. Urban residents and women are among the most concerned.

Perceptions of Mr. Bush as a strong leader have also risen. Now 70 percent describe him that way, up from 54 percent in June and 65 percent on Wednesday. That matches the highest rating for leadership Mr. Bush received from registered voters at the end of last fall's presidential campaign.

Support for the president continues to be bipartisan. Almost all Republicans approve of the way George W. Bush is handling the crisis as well as his job as president overall, as do more than seven in ten Democrats.

Americans continue to be confident in the U.S. government's ability to catch those who planned the attacks. Ninety-one are confident this will happen, with an increasing number, sixty-two percent, saying they are very confident.

Are Arab Americans More Sympathetic To Terrorists?
Yes 28%
No 51%

There is more suspicion of Arab Americans among men than among women, and Republicans are more suspicious than Democrats. But 87 percent of all Americans think it is likely that there will be problems of unfair treatment for Arab Americans and people from the Middle East, with nearly half of the public (46 percent) saying that is very likely.

Americans would like to see less immigration. But they have felt this way for a long time, and attitudes about immigrants often change with economic conditions. In this poll, 53 percent think immigration levels should be decreased, a typical level. Eighty percent think it is too easy for people from other countries to enter the United States.

This poll was conducted among a nationwide random sample of 959 adults interviewed by telephone September 13-14, 2001. The error due to sampling could be plus or minus three percentage points for results based on the entire sample.