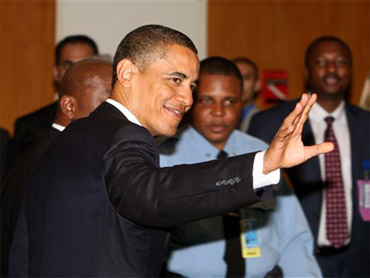 On the economy, one in two Americans approve of the president's performance. Forty percent disapprove. Mr. Obama fares far better than Congressional Republicans on the issue: Asked who has better ideas on the economy between the two, 53 percent cited the president while just 27 percent pointed to Republicans in Congress.

Fifty-six percent believe the president will eventually break his campaign promise not to raise taxes on households who earn less than $250,000 per year.

(CBS)
On Iraq, fifty-four percent approve of Mr. Obama's handling of the war, where most Americans believe things are presently going well.

Though it remains high, Mr. Obama's overall approval rating has fallen from April, when 68 percent approved of the president's performance.

Despite his many recent television appearances, most Americans do not feel the president is overexposed. Fifty-eight percent believe he has made about the right number of appearances. (Click the link to read more.)

While Michelle Obama's favorable rating has slipped from April 27th, when it hit 67 percent as the president celebrated his 100th day in office, it stands roughly where it has for most of the year.

This poll was conducted among a random sample of 1042 adults nationwide, interviewed by telephone September 19-23, 2009. Phone numbers were dialed from random digit dial samples of both standard land-line and cell phones. The error due to sampling for results based on the entire sample could be plus or minus three percentage points. The error for subgroups is higher.