(CBS)
Senate confirmation hearings begin today for Sonia Sotomayor, but just four in ten Americans have an opinion of the nominee, a new CBS News poll finds. Those with an opinion tend to be favorable and think she should be confirmed, though opposition has risen in the last month.

But what could be most significant is that 62 percent of Americans still are undecided or say they haven't heard enough about her yet to make a judgment. That is not unusual for a Supreme Court nominee just prior to his or her confirmation hearings and majorities could not assess previous nominees before their hearings either in CBS News polling. 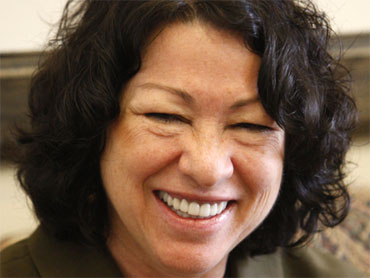 (AP Photo/Pablo Martinez Monsivais)
In fact, somewhat more people have opinions of Sotomayor now than had opinions of past nominees before their hearings.

Partisan differences in opinions of Supreme Court nominees are also not unusual. In this poll, 39 percent of Democrats have a positive opinion of Sotomayor compared to just eight percent of Republicans.

Since Justice Sandra Day O'Connor's 2005 retirement, just one woman – Justice Ruth Bader Ginsburg -- sits on the Supreme Court. The poll also finds that two thirds of Americans think it is important to have another woman on the Court, including 72 percent of women, 79 percent of Democrats and 57 percent of Republicans.

Sixty-seven percent of Democrats, but just 36 percent of Republicans, think this is important.

By two to one, Americans think Sotomayor ought to be confirmed, with 30 percent saying yes and 14 percent saying no. However 52 percent can't yet say.

Most Americans think that if she does serve on the Supreme Court, Sotomayor will treat all groups of Americans the same when she makes her judicial decisions. Just 21 percent think she will favor certain groups over others.


This poll was conducted among a random sample of 944 adults nationwide, interviewed by telephone July 9-12, 2009. Phone numbers were dialed from samples of both standard land-line and cell phones. The error due to sampling for results based on the entire sample could be plus or minus three percentage points. The error for subgroups is higher.