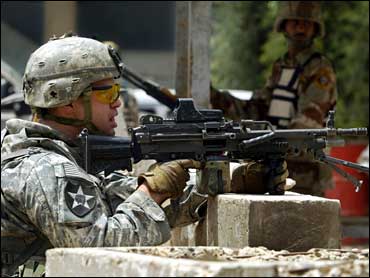 While Senate Republicans on Wednesday blocked a Democratic bid to force a vote on U.S. troop withdrawals from Iraq, a CBS News/New York Times poll finds a majority of Americans think Congress should not continue to fund the war unless a timetable for withdrawal is put in place.

WHAT SHOULD CONGRESS DO ABOUT IRAQ WAR FUNDING?

Americans remain extremely dissatisfied with the course of the war. Seventy-four percent, about the same number as last month, say the war is going badly, including 45 percent who say it's going very badly.

Again, there's a strong political split, with large majorities of Democrats (91 percent) and Independents (76 percent) saying the war is going badly, while half of Republicans say it's going well.

This poll was conducted among a random sample of 1,554 adults nationwide, interviewed by telephone from July 9-17, 2007. The error due to sampling for results based on the entire sample could be plus or minus three percentage points. The error for subgroups is higher. An oversample of women was also conducted for this poll, for a total of 1,068 interviews among this group, by selecting them with higher probability than men in households with both men and women. The weights of men and women in mixed-gender households were adjusted to compensate for their different probabilities of selection. The final weighted distribution of men and women in the sample is in proportion to the composition of the adult population in the U.S. Census.