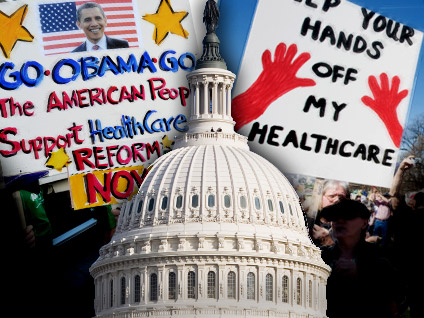 More Americans want to keep the sweeping health care reform legislation passed last year than want to repeal it, according to a new CBS News/New York Times survey. Forty-eight percent of Americans say they want to keep the law in place, while 40 percent want to see it repealed.

Republicans campaigned on repealing the bill in the run-up to the midterm elections, and one of the first actions of the new GOP-led House was to pass a repeal bill.

Among those who do favor repeal, 50 percent say they want the law repealed in full. Forty-four percent want only certain parts of it repealed.

Health care is not what many Americans say they want the new Congress to focus on, however. Just 18 percent say it should be the top priority for lawmakers.  A far higher percentage - 43 percent - says the most important issue is job creation.

Just one in four Americans say the health care law, which is being phased in gradually, has helped the economy. A higher percentage - 40 percent - say it has hurt.

Obama Approval Rating Up to 49 Percent

Poll: Many Want Congress to Focus on Jobs, not Health Care

This poll was conducted among a random sample of 1,036 adults nationwide, interviewed by telephone January 15 - 19, 2010. Phone numbers were dialed from RDD samples of both standard land-lines and cell phones. The error due to sampling for results based on the entire sample could be plus or minus three percentage points. The error for subgroups is higher.