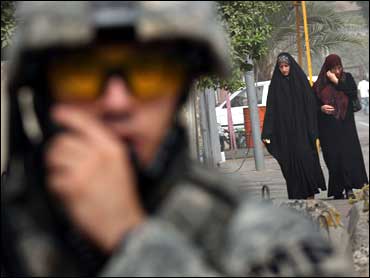 With President Bush's top military and diplomatic advisers on Iraq due to deliver a major progress report on the president's "surge" strategy, a new CBS News/New York Times poll finds that an increasing number of Americans believe the troop buildup in Iraq is having a positive impact.

U.S. Ambassador Ryan Crocker and Gen. David Petraeus are expected to warn Congress on Monday that making any significant changes to the current war strategy will jeopardize the limited security and political progress made so far.

Later in the week, Mr. Bush plans a national address.

Belief that the U.S. is winning the war in Iraq has grown a bit since January. Still, that perception is well below the levels of early 2006, and most Americans continue to see the war as a stalemate.

NOW: WHO IS WINNING IN IRAQ?

On the military front, Americans' views of the impact of the "surge" strategy are divided by political affiliation. Fifty-six percent of Republicans think surge is making things better in Iraq, while only 19 percent of Democrats and 32 percent of Independents do.

The poll finds a long-term pessimism remains about the Iraqi government: a 53 percent majority thinks Iraq will never become a stable democracy. Almost no one thinks it will occur within a year or two.

WILL IRAQ EVER BECOME A STABLE DEMOCRACY?

Yes, in year or two

4%
Yes, but will take longer

The poll finds that, in retrospect, a majority of Americans view the war in Iraq as a mistake.

DID U.S. MAKE A MISTAKE GETTING INVOLVED IN IRAQ?

Eighty-six percent of Democrats and 68 percent of Independents say the war was a mistake, while 31 percent of Republicans agree, according to the poll.