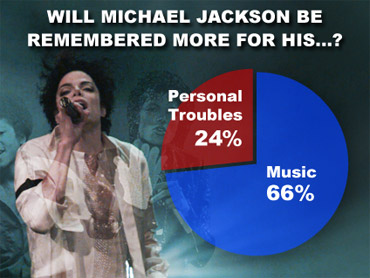 Americans believe Michael Jackson will be remembered more for his music than his personal troubles, a newly-released CBS News poll finds.

The survey found that 66 percent of those surveyed say the so-called "King Of Pop" will be remembered more for his legendary singing and dancing than for the plastic surgery, child sexual abuse charges and erratic behavior of his later years.

By contrast, one in four Americans say memories of that behavior will eclipse memories of Jackson's music.

Jackson's contemporaries - Americans between the ages of 45 and 64 - were most likely to say the pop star will be most remembered for his music, with 73 percent indicating as much. Jackson died at age 50.

A sizable chunk of Americans feel that Jackson was not treated fairly by the media, the poll finds. More than one in three say the media were harder on Jackson than other celebrities.

But the criticism also goes in the other directions: One in five Americans say the press was easier on Jackson. Forty-two percent said the media treated Jackson about the same as other celebrities.

This poll was conducted among a random sample of 944 adults nationwide, interviewed by telephone July 9-12, 2009. Phone numbers were dialed from random digit dial samples of both standard land-line and cell phones. The error due to sampling for results based on the entire sample could be plus or minus three percentage points. The error for subgroups is higher.