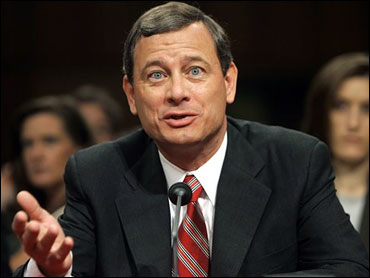 38%
Not very/not at all closely

32%
Not very/not at all closely

Americans do think that the elevation of Roberts' nomination from Associate Justice to Chief Justice means the Senate will need to conduct an even more thorough investigation of him during the hearings. Fifty-three percent think that since Roberts' nomination has now been elevated to Chief Justice, the Senate needs to scrutinize him more closely than they would have if he were still under consideration as an Associate Justice. Thirty-two percent think he does not deserve more scrutiny.

Views on this question are influenced by partisanship. Sixty-three percent of Democrats think he now deserves closer scrutiny, compared to only 39 percent of Republicans.

Nearly half think it is very important that the Senate know Roberts' position on issues such as abortion and affirmative action before they vote on his confirmation as Chief Justice. Another 31 percent think that is somewhat important. Those views are unchanged from two weeks ago.

When asked whether the Senate ought to confirm Roberts right now, most Americans can't offer an opinion. Twenty-six percent think he should be confirmed.

SHOULD ROBERTS BE CONFIRMED BY THE SENATE AS CHIEF JUSTICE?

Overall views of Roberts have not changed much in the last couple of weeks. Twenty-five percent have a positive impression of him, 8 percent have a negative view, but most – 66 percent -- are undecided or haven't heard enough to have an opinion. About the same number – 61 percent -- are unable to evaluate Roberts' conservatism.

POSITIONS ON THE ISSUES

WHEN EVALUATING A COURT NOMINEE, SENATE SHOULD CONSIDER:

Two weeks ago
Legal qualifications only

WHEN EVALUATING A NOMINEE FOR CHIEF JUSTICE, SENATE SHOULD CONSIDER:

This poll was conducted among a nationwide random sample of 1167 adults, interviewed by telephone September 9-13, 2005. The error due to sampling for results based on the entire sample could be plus or minus three percentage points. An oversample of African Americans was also conducted for this poll, for a total of 211 interviews among this group. The margin of error for African Americans is plus or minus seven points.