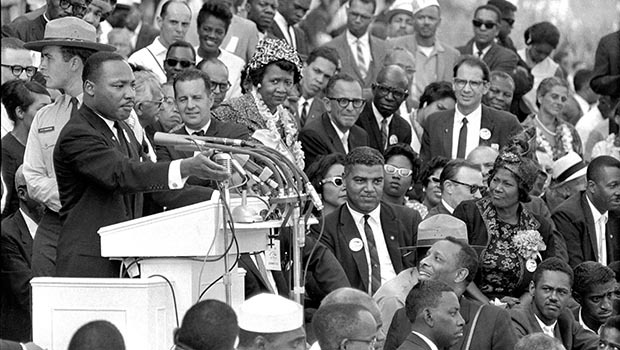 But 50 years after the March on Washington, few Americans - just four percent - think all of the goals of Martin Luther King and the 1960s civil rights movement have been achieved. While 31 percent think most of these goals have been achieved, a 55 percent majority (including 62 percent of blacks) think that only some have been achieved.

Differing views may be a result of different personal experiences. Just 29 percent of whites say they can think of a specific instance where they felt discriminated against because of their race, but this rises to 62 percent among blacks.

At the same time, Americans do recognize some progress. Nearly three in four (73 percent) say there has been a lot of real progress in getting rid of racial discrimination since the 1960s. This percentage has risen since the 1990s, when CBS News first began asking the question.

Majorities of both blacks and whites think there has been a lot of progress, but more whites (78 percent) than blacks (55 percent) think that.

A slim majority of Americans (52 percent) think there's now real hope in ending discrimination in the long run - the first time a majority has said this since CBS News first asked the question in 1992. Still, 42 percent think there will always be a lot of racial prejudice and discrimination.

Blacks and Whites: Getting Ahead and the Justice System

When this question was last asked in February 2000, nearly a decade before Mr. Obama assumed the presidency, Martin Luther King Jr. was the top choice at 20 percent.

This poll was conducted by telephone from August 7-11, 2013 among 1,006 adults nationwide. Data collection was conducted on behalf of CBS News by Social Science Research Solutions of Media, Pa. Phone numbers were dialed from samples of both standard land-line and cell phones. The error due to sampling for results based on the entire sample could be plus or minus three percentage points. The error for subgroups may be higher. Interviews were conducted in English and Spanish. This poll release conforms to the Standards of Disclosure of the National Council on Public Polls.