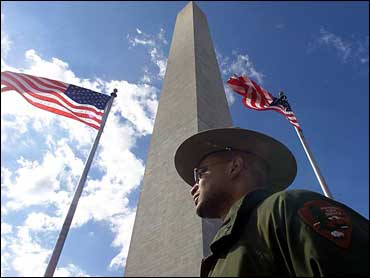 Americans believe they will have to give up some of their personal freedoms to make the country safe from terrorist attack and will put up with video surveillance cameras in public places, a CBS News poll shows.

The public will be especially tolerant of cameras at national monuments and sights that are important symbols of U.S. history, the poll showed.

While Americans appear to be willing to allow government and police agencies to go to great lengths to combat terrorist attacks, there was more reluctance to accept surveillance cameras on city streets in an effort to combat crime.

Americans feel, by a three-to-one margin (72%-24%), that they will have to give up some of their personal freedoms in order to make the country safe from terrorist attacks.

Acknowledging that some personal freedoms will be lost, Americans, by an overwhelming majority (77%-18%) would approve of government agencies or police agencies installing video surveillance cameras in public places in order to prevent possible terrorist attacks.

When it comes to privacy, most poll respondents didn't feel cameras at national monuments and symbols of U.S. history were an invasion of privacy (81%-17%). And of those who did consider it an invasion, more than half said it was only a minor invasion.

The idea of surveillance cameras filming people on a day-to-day basis in order to reduce crime was a little more troubling to poll respondents.

While just about half (49%) of those polled felt the cameras would help reduce crime, more than a third (34%) said they would be an infringement of privacy. An additional 11% said they would do both.

This poll was conducted among a nationwide random sample of 1,119 adults, interviewed by telephone April 15-18, 2002. The error due to sampling could be plus or minus three percentage points for results based on the entire sample.size>