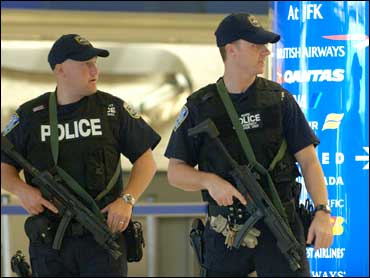 Three in four said banning U.S. air travelers from packing liquids such as drinks and gels like toothpaste in their carry-on luggage was necessary.

Nearly as many (70 percent) said even tighter restrictions in England - permitting passengers to carry on only their wallet, passport and prescription medicine - were necessary.

The poll also found that news of the U.K. plot has heightened concerns about terrorism in the U.S.

While the war in Iraq remains the number one problem facing the country, terrorism has risen to the number two concern, according to 17 percent of the respondents, up from just 7 percent last month.

More Americans now expect a terrorist attack in the U.S. in the near future, despite the administration's report that there is no sign of terrorist activity on U.S. soil.

Sixty-four percent said a terror attack on the U.S. is likely in the next few months, up 11 points from earlier this year.

Seven in ten Americans said the British terrorist plot was a major threat to the U.S.

There is no indication that the re-emergence of terrorism as a major issue has helped President Bush's popularity. His job approval remains exactly at 36 percent, where it was a month ago. Even the president's rating for handling terrorism – his strongest suit – remains unchanged at 51 percent.

The recent terrorism threat has also had little effect on views of the two parties. Republicans are seen as being better than Democrats at addressing terrorism by a 42 percent to 34 percent, about the same as a month ago.

Democrats, meanwhile, have a slight advantage on making the right decisions about the war in Iraq.

Overall, Americans have a more negative view of how the war on terrorism is going.

Just 35 percent say the U.S. and its allies are winning the war on terrorism – the lowest number since January 2003 and down eight points since June. One in five think the terrorists are winning, the highest number in nearly four years.

Forty-one percent of Americans think the Bush administration has focused too much on the war in Iraq and not enough on terrorism; 48 percent think the balance has been about right.

A growing number of Americans, 48 percent, think the war in Iraq has increased the threat of terrorism against the U.S. - the highest number since May 2003.

Only 9 percent now think the war in Iraq has decreased the threat of terrorism.

This poll was conducted among a nationwide random sample of 974 adults, interviewed by telephone August 11-13, 2006. The error due to sampling could be plus or minus three percentage points for results based on the complete sample.