Politics Today is CBSNews.com's inside look at the key stories driving the day in politics, written by CBS News Political Director Steve Chaggaris: 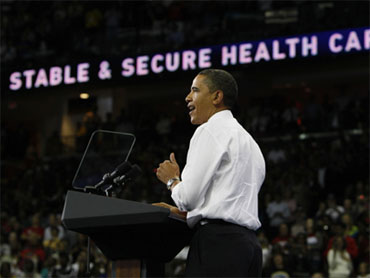 (AP Photo/Charles Dharapak)
PRESIDENT OBAMA: President Obama spends most of his afternoon in front of TV cameras as he tapes five interviews for five different networks to air on Sunday. Add that to his scheduled appearance on "The Late Show with David Letterman" and to the seemingly his anti-invisible nature since he took the oath of office and the question is raised: is it too much?

The New York Times' Mark Leibovich writes, "As President Obama prepares for his speed date with the Sunday morning talk shows, a familiar question dogs his aides: 'How much Obama is too much Obama?'...

"Is the president cheapening his currency by being so visible? Or is he simply being media savvy?

"Those arguing that there has been too much Obama include Ken Spain, communications director for the National Republican Congressional Committee.'"People are beginning to tune the president out,' Mr. Spain declared in an interview Wednesday.

"White House aides maintain that the president is the single best advocate for his message, and they tend to treat questions of whether he is being overexposed with the annoyance one might direct at a fly.

"'The president's 'overexposure' is a media-driven obsession that rears its head in between the media's interview requests for him,' said Bill Burton, deputy White House press secretary." 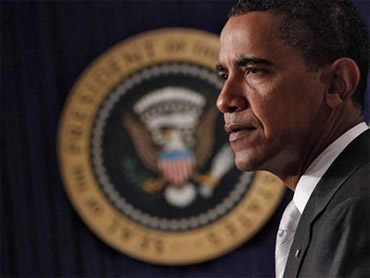 (AP Photo/Charles Dharapak)
HEALTH CARE: What will the president be focusing on during all of these interviews? You guessed it: health care.

"Republicans in Congress remained bitterly critical of Democratic health care efforts, while Democrats remained divided over how to proceed. ...

"There continued to be little consensus on broader health issues. The day after Senate Finance Committee Chairman Max Baucus, D-Mont., offered a plan that he hoped would draw bipartisan support, few Democrats or Republicans were optimistic about finding common ground."

5315673"Baucus said Thursday he expects to make adjustments to his health-care plan, in a bid to solidify support for the bill after some Democrats said it would impose big costs on middle-income families," adds the Wall Street Journal's Greg Hitt.

"Mr. Baucus's maneuvering came a day after he unveiled his long-awaited bill, designed to expand insurance coverage to tens of millions of Americans not now covered. The bill includes a requirement that most Americans carry health insurance or pay a fine, and creates a new tax on high-dollar health plans.

"Critics of the bill say some lower-to-middle-income Americans would have trouble affording coverage under the Baucus plan. Among those expressing that concern is Sen. Olympia Snowe of Maine, the Republican whom Senate Democrats have the best hope of winning over.

"Mr. Baucus, a Montana Democrat, made clear he was flexible. 'We're going to have to work all that out,' he said."

"Lawmakers in both parties raised concerns Thursday that the health-care reform bill offered by Senate Finance Chairman Max Baucus a day earlier would impose too high a cost on middle-class Americans and said they will seek to change the legislation to ease that potential burden. ...

"How to make insurance more affordable to the estimated 30 million uninsured people who would be required to buy coverage under the Baucus proposal is emerging as a central challenge as the long-awaited plan advances to full committee debate Tuesday. Democrats and Republicans alike worry that a bill intended to address one source of financial hardship -- the skyrocketing cost of health care -- could lead to another, in the form of hefty premiums."

One large sticking point, reports the New York Times' Robert Pear and David M. Herszenhorn, is the proposal to tax insurance plans with premiums more than $8,000 a year for individuals and $21,000 for families.

"Senators of both parties said Thursday that they would seek significant changes in a Democratic proposal to tax generous high-cost health insurance policies.

"The tax, proposed as a way to help finance coverage of the uninsured, would be levied on insurance companies. But the senators said they worried that it would be passed on to individual policyholders, families and employers who buy insurance for their workers." 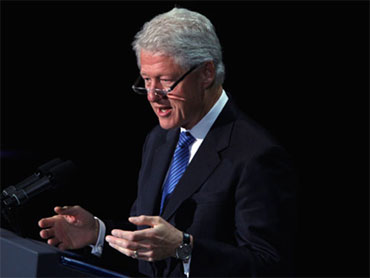 "'It would be good if he could get some Republican support,' Clinton, 63, said in an interview yesterday in New York, speaking of the Baucus bill. 'I believe he'll get Snowe and he could get Collins and he might get three or four others.'

"Clinton said the legislation proposed by Baucus, a Montana Democrat, was as far-reaching as the Senate would accept." 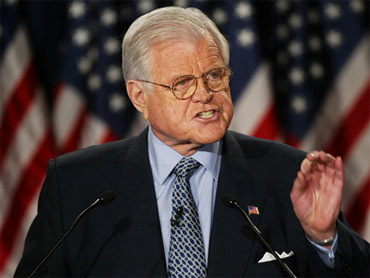 (AP Photo/Manuel Balce Ceneta)
REPLACING TED KENNEDY: "House lawmakers approved legislation last night that gives Governor Deval Patrick the power to appoint a temporary successor to the late Edward M. Kennedy in the US Senate, putting Massachusetts on track to have a new senator in place by next week," reports the Boston Globe's Matt Viser.

"The passage of the bill, by a 95-to-58 vote, was a crucial step toward filling the seat left vacant by Kennedy's death last month and could carry major implications as Congress debates an overhaul of the nation's health care system. …

"The legislation now goes to the Senate, where top lawmakers believe they have enough votes for it to pass, presuming some supporters do not get cold feet. Republicans, however, vow to use parliamentary maneuvers to stall final passage for as long as possible."

Regarding January's special election to fill Kennedy's seat, the Globe's Frank Phillips reports, "Massachusetts voters will face their first blitz of political ads today in the race to replace US Senator Edward M. Kennedy, a clear sign that the abbreviated battle for the US Senate seat will be waged in large part on the airwaves.

"Venture capitalist Stephen Pagliuca, who officially launched his candidacy yesterday, has purchased $500,000 worth of television air time across the state. In his first 30-second ad, he describes his professional background and promises to travel across the state to talk to voters. He said he is running to bring a 'new way of doing business in Washington.'

"His campaign plans to run the ad for a week, but Pagliuca, who is estimated to be worth $400 million, is expected to continue advertising heavily until the Dec. 8 primary.

"US Representative Michael E. Capuano, a six-term Somerville Democrat, will declare his candidacy today at Boston's Omni Parker House, having bought $300,000 to $400,000 worth of statewide television ads that will run for the next several weeks."
2009 VA GOV: Washington Post's Anita Kumar and Rosalind S. Helderman, "Thrust and Parry Over Va.'s Future": "Democrat R. Creigh Deeds and Republican Robert F. McDonnell offered starkly different views on jobs, transportation, taxes and social issues Thursday in a debate that was combative almost from the minute the candidates for governor stepped onto the stage.

"Both men were on the offensive for the duration of the hour-long debate in Tysons Corner. McDonnell accused Deeds of being a big spender who would increase the tax burden on Virginians, and the Democrat repeatedly attacked his opponent over a 20-year-old graduate school thesis, in which McDonnell laid out a conservative action plan to promote traditional families through government policy."

2009 NJ GOV: Associated Press, "Corzine continues to tout ties to Obama": " New Jersey's Democratic governor is taking every chance he can to point out his similar views to President Barack Obama — even promoting the divisive "public option" for health insurance. Meanwhile, his Republican challenger is careful not to speak ill of the president."

2009 GUBERNATORIAL RACES: The Hill's Reid Wilson, "For Va. and N.J. races, victory is in the spin": "Republicans and Democrats argue publicly that the results of November's New Jersey and Virginia gubernatorial races will shed little light on the national political landscape. But privately they're more worried." 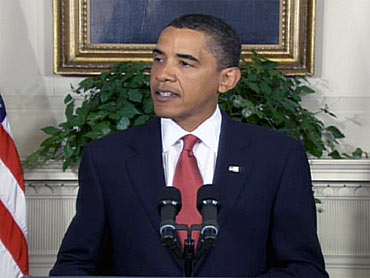 NY Times' David E. Sanger and William J. Broad, "New Missile Shield Strategy Scales Back Reagan's Vision": "The new plan that President Obama laid out for a missile shield against Iran on Thursday turns Ronald Reagan's vision of a Star Wars system on its head: Rather than focusing first on protecting the continental United States, it shifts the immediate effort to defending Europe and the Middle East. It is a long way from the impermeable shield that President Reagan described in glowing terms in 1983, an announcement that turned into a diplomatic triumph even while it was a technological flop. Ever since, missile defense has always been more about international politics than about new military technology."

Associated Press' Tom Raum, "Protectionism rising despite G-20 vows on trade": "Leaders of the world's 20 top economies vowed to resist protectionism last November and again in April as they charted a joint strategy for confronting the worst global downturn in generations. As they meet again, they'll get this progress report: Most of their economies are on the mend — and trade tensions and protectionism are on the rise."

Associated Press' Steven R. Hurst, "US battles for credibility on climate change": "With Congress moving slowly on a measure to curb industrial greenhouse gas emissions, the United States may find itself with little sway at the coming international conference to construct a new pact aimed at easing global warming."

Washington Post's Paul Kane, "Pelosi Says Anti-Obama Rhetoric Sounds Familiar": "House Speaker Nancy Pelosi (D-Calif.) on Thursday said she worries that the protests of President Obama's health-care legislation may be of a similar nature to anti-gay rhetoric in the late 1970s in San Francisco, which culminated in the assassinations of two of her home town's political leaders."

New York Times' Carl Hulse, "House Prohibits Federal Money to Acorn": "The House voted Thursday to deny any federal money to the nationwide community organizing group Acorn, and the Senate reaffirmed its opposition as well after embarrassing videos of a few of the group's workers became public."

Wall Street Journal's Brody Mullins and Jake Sherman, "Acorn May Cut Voter-Registration Work": "Community-organizing group Acorn said Thursday it was considering quitting its voter-registration work amid a growing political storm over its activities, a move that could hurt Democrats at the polls."

Salon.com's Alex Koppelman, "'Values Voter Summit' clashes with Jewish values": " The Family Research Council is holding its annual 'Values Voter Summit' in Washington this weekend. The summit gives Republicans, including some would-be presidential candidates, a chance to play to activists -- unless, that is, those activists happen to be Jewish. The summit this year coincides with Rosh Hashanah, the Jewish New Year and one of the religion's most important holidays; it begins Friday night at sundown."

Wall Street Journal's Jake Sherman, "House Ethics Panel Probes Rep. Waters": " The House ethics panel said Thursday that it is investigating Rep. Maxine Waters, a California Democrat who came under scrutiny for allegedly helping a bank with which she had ties secure a meeting with Treasury Department officials about obtaining bailout funds."

Politico's Andie Coller and Daniel Libit, "Conservatives use liberal playbook": " Conservatives are coming for the Democrats on their blind side — the left. The evidence is everywhere. At tea parties and town halls, conservative demonstrators oppose health care reform with signs bearing the abortion-rights slogan 'Keep your laws off my body' or the line 'Obama lies, Grandma dies' — an echo of the 'Bush lied, they died' T-shirts worn to protest the Iraq war. ... The left-wing rhetoric and symbolism is so thick on the right, in fact, that some conservatives have been taken aback by it: The logo for the Sept. 12 protest in Washington, which organizers called the 'March on Washington,' featured an image that looked so much like those associated with the labor, communist and black power movements that some participants objected to it — until they found out that's what the designers were shooting for."