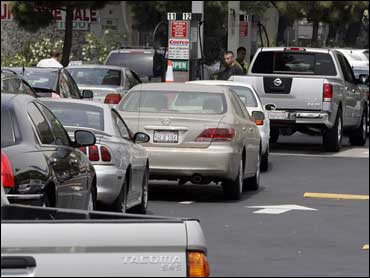 This column was written by Thomas E. Nugent.

I suffered a minor heart attack when I saw the price of my latest fill up: $90. Gas is just under $4 a gallon here in South Carolina, and like many Americans I could be in for a major coronary when the pump price soars past $4.50 or even $5 this summer.

Rising energy prices have put a kink in vacation plans this year. Consumer confidence hasn't been this low since 1980 (back when interest rates on car loans were 21 percent). There are still an untold number of gas-guzzling SUVs on the road, a visible contradiction to the so-called adverse consumer reaction to high gas prices. What gas price will trigger a meaningful backlash? I think we're pretty near that point.

Of course, we've hardly got it as bad as Europe - especially France, where the equivalent gallon-price of gas (after the euro/liter conversion) is about $9. No wonder most of their cars look like they were built for the golf course.

That said, oil consumption is only up about 1 percent year over year. So why are oil and gas prices soaring?

Some of the blame goes to "investors" in hard assets, which includes oil. On the advice of academics who said commodities are a good portfolio diversifier, a lot of institutional investors got involved in oil speculation, thus helping bid up the barrel price. There's also a continued rise in global demand, even as the U.S. slows. A growing third world is consuming much more oil than ever before.

But the true culprits are located in Washington, D.C.

Remember all those Democrats in 2006 who promised lower gasoline prices if they got elected? Well, they got elected. And what did we get? Much higher oil and gas prices.

Investor's Business Daily, the free-market newspaper, has pointed out that Democrats are a prime cause of killer oil and gas prices. About a week ago the Senate failed to end the moratorium on oil-shale development in Colorado. Republicans voted for removing that moratorium; Democrats voted against. But voters put more Democrats in office than Republicans, so here we are.

By the way, that shale-oil reserve potential is about 1 trillion barrels. Then there's Alaska and offshore, where another 50 billion barrels of oil are awaiting development. But this Congress says such exploration is off limits. The result? We'll continue to export wealth to the tune of $600 billion per year by relying on foreign crude and OPEC for our energy needs.

Not to be outdone, politicians in Washington are still saying help is on the way. One idea is to eliminate the gas tax and thereby keep gas prices from rising. That's it, guys and gals! Keep encouraging more consumption of something you won't let the free-market drill for in the first place. As Ronald Reagan said, "There they go again."

The next time Congress tries to blame oil companies for high oil prices - or OPEC, or the insatiable, over-consuming U.S. public - remember these statistics. Remember them especially when you make that trip to the polling place in November.

If economic growth means anything to you, you'll vote for the candidate who is pro-growth, not pro-OPEC.
By Thomas E. Nugent
Reprinted with permission from National Review Online