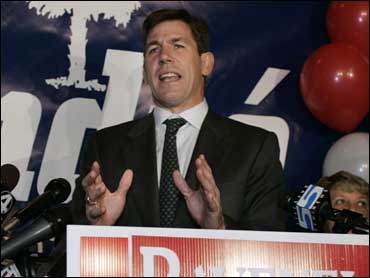 The millionaire is accused of buying less than 500 grams of the drug to share with other people in late 2005, U.S. Attorney Reggie Lloyd said. Ravenel, 44, is charged with distribution of cocaine, which carries a maximum sentence of 20 years in prison.

The investigation into Ravenel arose from a drug case last year in Charleston, Lloyd said. State Law Enforcement Division Chief Robert Stewart said his agents were aware of the allegations before Ravenel was elected in November, but they didn't have enough information to pursue criminal charges. The case was turned over to the FBI in April.

"The investigation is just beginning," the federal prosecutor said.

The man accused of selling Ravenel the drug, Michael L. Miller, is in custody on the same charge.

Ravenel will be allowed to turn himself in, authorities said. The treasurer's office referred all questions to Ravenel's lawyer Joel Collins, who did not return a message left at his office.

Gov. Mark Sanford suspended Ravenel immediately based on the serious nature of the charge. The governor said he would name an interim treasurer soon.

"These are obviously very serious allegations that we're constitutionally bound to act upon, and they'll ultimately be decided by the courts." Sanford said in a statement.

Ravenel started his political career in 2004, funding his own campaign for a U.S. Senate seat. He finished a close third in the Republican primary.

Ravenel was founder of the Ravenel Development Corp., a commercial real estate development company. His father, Arthur Ravenel Jr., was a powerful politician from Charleston who served eight years in the U.S. House and is a former state representative and state senator.