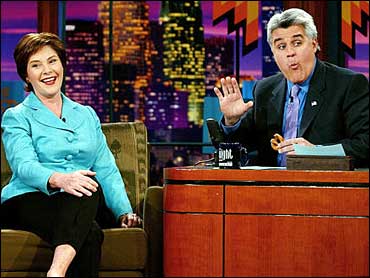 Once it was rare for Washington bigwigs to risk their dignity for laughs on TV talk shows. Now the Hollywood route is routine, safe even for talk about somber issues like terrorism.

First lady Laura Bush made light of the president's tussle with a pretzel when she appeared on Leno's "Tonight Show" last week. He's practicing "safe snacks" now, she cracked.

And Secretary of State Colin Powell fielded questions on MTV, upsetting some conservatives when he endorsed condoms for sexually active young people.

The Bush administration - from George W. Bush's frequent campaign stops on comedy shows to this month's round of appearances by top officials - shows the trend is here to stay.

"What Clinton proved is television is television, and celebrity is celebrity and it doesn't matter where you get it," said Marlin Fitzwater, White House press secretary when Bush's father was president.

In the 1992 presidential race, when Clinton made headlines by donning dark glasses to play saxophone on Arsenio Hall's show, Fitzwater advised then-President Bush to stay off such programs to preserve his dignity.

"I was wrong," Fitzwater says now.

Earlier presidents had tested the waters - even Richard Nixon.

After a couple of bruising election defeats, Nixon lightened his image by playing piano on Jack Paar's program. And just weeks before winning the White House in 1968, Nixon delivered a single, stiff line on "Laugh-In": "Sock it to me?"

But that was a far cry from Clinton divulging on MTV that he preferred briefs to boxer shorts.

The presidential candidates mocked themselves in a "Saturday Night Live" special shown just two days before Election Day - Bush poking fun at his mangling of words, Gore at his tendency to inflate his place in history.

"I have seen things on the show I thought were, in a word, offensible," Bush said.

Gore: "I was one of the very first to be offended by material on 'Saturday Night Live."'

Entertainment shows aggressively court candidates by offering free air time, often unedited. When Bush appeared on Leno's "Tonight Show" during the campaign, he got more time in one night than during the entire month on NBC News, said Robert Lichter, president of the Center for Media and Public Affairs. And surveys suggest millions of Americans rely on comedy shows to keep them up to date on the news.

"I don't think the word 'dignity' is relevant anymore," Lichter said. "The human touch is what counts, and if you can get that by chatting with Jay Leno, that's fine. You don't lose from it."

Of course, Hollywood's allure isn't all about politics. Like just about everyone else, politicians seem drawn to star power. Bush and his team may prove to be smitten, too.

Bush invited Clint Eastwood to his first state dinner and appointed Bo Derek a Kennedy Center trustee. The cast of NBC's "West Wing," who play a fictional Democratic White House staff, got a private tour of the real thing recently.

Democrats have long had an advantage in endorsements from show business, but President Reagan - who was, after all, an actor - narrowed the gap.

Clinton was adept at collecting campaign contributions from Hollywood, but Democratic criticism of violence in movies and music may have dampened entertainment industry enthusiasm for the Gore-Joe Lieberman ticket in 2000. Bush's anti-regulatory philosophy is friendlier to show business than Clinton's policies were.

"I expect the relationship to grow over time," said Los Angeles conservative David Horowitz, an early supporter who introduced Bush to director Oliver Stone - one of Hollywood's most vocal liberals - and other entertainment notables at the Beverly Hills Hotel.